At our meeting on Wednesday, Gillian Waters told the complicated story of William the Conqueror and the Harrying of the North with clarity and passion. She described the events leading up to 1066 and explained that there were many uprisings against the Normans over the following years, many of them starting in the North. Retribution followed; with William burning and destroying land and homes, forcing the population to flee and causing famine. The effects were felt for around 200 years. Powerful Norman lords like Warrene in Wakefield were given manors in the North to ensure William remained in control. An enlightening talk about a lesser known period of history!

VISIT TO HERITAGE QUAY AT THE UNIVERSITY OF HUDDERSFIELD

Wakefield Historical Society belongs to the West Yorkshire Archives Network Group, and a visit to the University of Huddersfield Archives at Heritage Quay was arranged on 4thMarch.  Anna Carter from West Yorkshire Archives and representatives of various local community archives, and other local and family history groups updated us about their events, exhibitions and ongoing research.

We were then given a tour round the archives which has collections of national importance. The Rugby League was established in 1895 at a meeting in the George Hotel in Huddersfield and the National Rugby League Archive is held at Heritage Quay – it will, no doubt, hold a wealth of information about Wakefield Trinity. They have also recently acquired  the National Netball Archive. They hold a large collection relating to 20thcentury classical music, and an archive relating to dance bands. The archives of the Wesley Historical Society (Yorkshire) are held here; this comprises over 25,000 printed items relating to Yorkshire Methodism.The publications of the poet Ted Hughes who was born at Mytholmroyd are in the collection, and at present there is an exhibition about Patrick Stewart of Startrek fame, whose archive is also held here.

You can find out more about their collections at their website:  http://heritagequay.org

TALK ON THE TUDOR AND STUART BUILDINGS OF WAKEFIELD.
8th January 2020 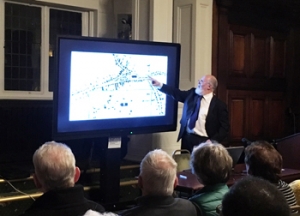 A packed meeting enjoyed Peter Brears’ talk about the Tudor and Stuart buildings of Wakefield on 8th January. He described the wealth that had been gained by Wakefield in that period through wool and textiles, which enabled the rich citizens to build fine houses with beautifully carved timber and plasterwork. He described his own efforts and those of John Goodchild to save artefacts from the buildings that were being demolished in the 1950s and 1960s, many of these eventually ending up in the Museum’s storage facility. Peter also encouraged us to be aware of what does remain in our city, often hidden under later alterations.

An excellent talk exploring a little known period of the history of Wakefield, and more to be learnt from his book on the subject!