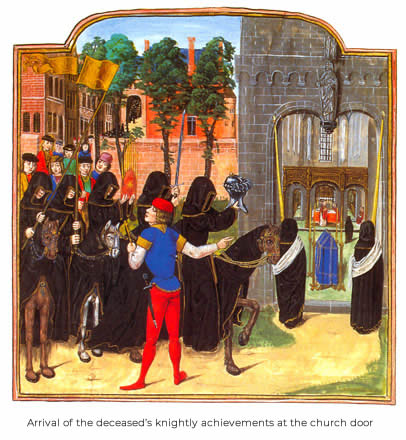 Between two and three in the afternoon of 29th July, 1476 the cortege arrived at Fotheringhay and was met with great reverence by a procession from the college led by the Dean, some ten Bishops, including the Bishops of Lincoln, Norwich, Hereford and Carlisle and the Archbishop of York elect, and many Abbots, each in their pontifical robes. Waiting at the gate of the churchyard to accompany the body was the King, Edward IV, dressed in a dark blue hooded mourning habit trimmed with fur. The King ‘very humbly did his obeisance to the said body and laid his hand on the body and kissed it, weeping’.  Also waiting to escort the body were the King’s brothers and numerous earls, dukes and barons including the Earls of Northumberland, Essex and Kent, all dressed in mourning.

Here the body was taken from its carriage and borne by twelve knights, former servants of Richard, into the choir, where it was placed in a beautifully adorned hearse, with six other knights carrying the accompanying banners. In the church were the Queen, two of her daughters and many married and unmarried ladies all dressed in mourning. The king retired to a private closet and the princes entered the hearse, the officers at arms standing on either side. Edmund, Duke of Rutland’s body was similarly taken to the Chapel of Our Lady nearby. A dirige was sung and a sermon delivered. Then the King’s chamberlain offered up yards of cloth of gold to be draped over the coffin in the shape of a cross, as did the Queen’s chamberlain. Overnight the bodies were guarded by men who had formerly served the Duke.