Following the Battle of Towton, one of Edward’s first acts was to have the heads of his father and brother taken down and reunited with their bodies. It is probable that the bodies had been taken back to Pontefract Castle, as the Lancastrians had set out from their stronghold there on the day of the Battle of Wakefield, and indeed some of their other prisoners were taken and beheaded there that day. York and Rutland’s bodies may well have been buried at the nearby Priory of St. John the Evangelist, although there are no records to confirm this. 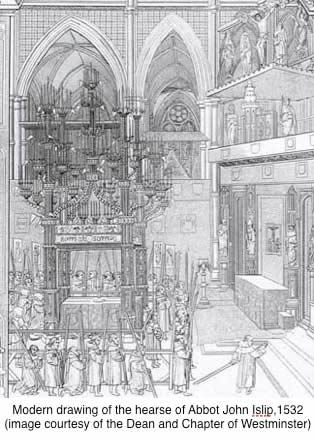 Shortly before Sunday 21st July 1476 the bodies were exhumed and the coffins placed in hearses in the choir of the church of the Priory in Pontefract.  For such a powerful person as Richard, Duke of York, the hearse was a house-like structure, enclosed with pillars and an ornamental roof, beneath which hung the cloth of majesty. It was fenced on all sides by barriers, allowing space for the most eminent mourners to enter and mourn privately.  The whole structure was profusely decorated with flags, banners, pennants and escutcheons, heraldic and religious symbols, and covered in huge multiple candelabra.  Hundreds of wax candles illuminated the scene, as many as four thousand on some occasions, generating so much heat that church doors had to be opened and windows removed.  Gilded images of kings and angels decorated the pillars, along with silver roses and other Yorkist symbols, the fetterlock and the sun, Edward IV’s personal emblem.

The coffin was draped with cloth of gold worked with a white satin cross and was surmounted by a life-size effigy of Richard, its face uncovered and life-like. Its eyes were open to look up at the image of Christ in Judgement, seated on a rainbow, intended to remind everyone of the coming of Judgement Day. The hands were folded in prayer and the figure dressed in a gown of dark blue, the mourning colour of kings, with ermine trim.  On its head was a purple cap of maintenance also furred with ermine, and a white angel held a golden crown over its head, symbolising that Richard was King by right.  Also on the pall were placed symbols associated with him, such as his coat of arms, sword or crown. Certainly, too, a written epitaph or poem celebrating Richard’s life, his achievements and knightly deeds, was hung on the hearse for all to read and some to copy. This proclaimed his right to the crowns of England and France. Once the bodies had departed, the hearse decorations, cloths, valances and candelabra were left to the churches as alms.  These materials would have been transformed into curtains and altar cloths and used for years hence.

On Sunday night a dirige was sung and Vigil of the Dead said, attended by many Bishops, including those of Durham, Hereford and Chester, with abbots and other clergy. Several choirs sang, including that of the Chapel Royal which later accompanied the bodies on the journey and sang at every service on the way. Next morning, Monday 22nd July, a requiem mass was said and a sermon delivered, probably by the Bishop of Durham, Archbishop-elect of York, before the procession began its long journey to Fotheringhay.