The site of Richard’s death

Today the site of Richard’s death is marked by a Victorian monument set up by subscription in 1897. It was organised by Wakefield local historian J W Walker. He had already undertaken the first excavations at Sandal Castle in 1893, which established the approximate layout of the castle, and he believed that he had found the foundations of the original monument to Richard at the place where he erected the new monument, which was designed by Gerald Horsley. 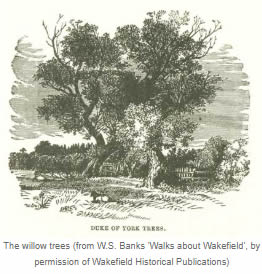 Although Edward IV is said to have erected a monument to his father on the spot where he died, we don’t know what it looked like. It was mentioned by William Camden in the late 16th century in Britannia, his survey of the antiquities of Britain. Parliamentary soldiers destroyed it during the Civil War in the 1640s. So for the following 250 years until the Victorian monument was put up, the site of Richard’s death was preserved only in local memory. The site was said to be marked by three or four willow trees, but by 1865 only two remained.

If the place has been accurately remembered over the centuries, then the most surprising thing about the site of Richard’s death is how close it is to Sandal Castle. It lies only a few hundred yards from the castle gatehouse. How could the Duke have been surprised by a force large enough to overpower him so close to safety?