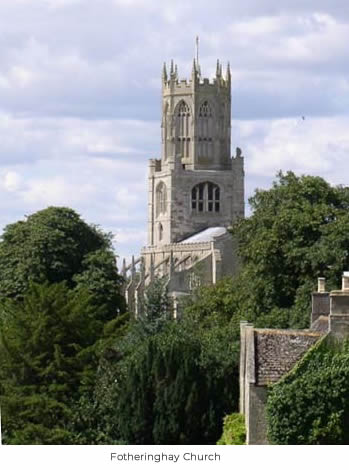 On 29th July between 2 and 3pm the cortege arrived at its destination, Fotheringhay, the seat of the house of York.  During the final part of the journey the travellers could see ahead the octagonal lantern tower of the magnificent church high above the gentle rural landscape.  On the summer afternoon of 1476, the white stone of the church, quite recently completed in the perpendicular style, shone in the sunshine.  As they approached, the windows appeared freshly glazed with brightly coloured glass.  Inside, a great hexagonal painted pulpit, a gift of Edward IV, was newly in place.

To the left, vying for the mourners’ attention, was the ancient keep of  Fotheringhay castle, prominent on its large mound.  It was one of the finest castles in England, still defensively impressive, standing as it was on the north bank of the River Nene, and with a double moat to complete the encirclement, but also comfortable and modern with a new manor house inside the walls as well as the usual stables, workshops, bakehouses, kitchens, breweries, butteries and barns.  The castle had been designed to create the shape of a fetterlock, the Yorkist symbol.  This was one of the principal seats of the Yorkist family and Richard, Duke of Gloucester, who was born there and spent time there in his childhood, must have watched the familiar buildings looming larger ahead and felt as though he was nearing home.  He and the important mourners could be comfortably accommodated at the castle or college.  Other guests might stay at the Old Inn or the New Inn – only just completed in time for this event – or the “Garden Farm” in the village. 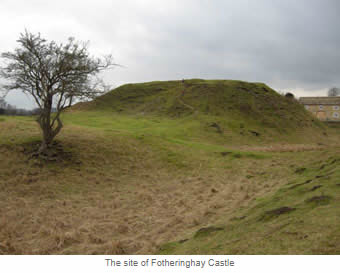 The family connection with Fotheringhay had begun when Edward III gave the manor to his son Edmund Langley, the first Duke of York.  Edmund laid plans for a Collegiate Church to replace the small earlier church on a site beside his Castle.  It would serve as a chantry with accommodation for priests who would pray for the souls of his family.  He died in 1402 before building had commenced but his son Edward, the second duke continued with the plan.  When he died at Agincourt in 1415 he was buried in the choir at Fotheringhay and chantry priests were there.  Building continued and a cloister for the College on the south side of the church was finished in 1430.  Under Richard, Duke of York, the third Duke, the construction of the great church and its collegiate buildings proceeded.  Every part of these bore the arms of the Yorkists and Plantagenets.  In 1446 the College consisted of 12 chaplains, eight clerks and thirteen choristers under a master, and records suggest it was one of the most impressive musical establishments in late medieval England.  As well as chantry and mausoleum for the Yorkist family, it was a centre of learning and religion, providing a accessible retreat for the great and good of English society.  Refounded by Edward IV in 1462 it was a magnificent institution befitting a royal court.  Fotheringhay church is now all that remains of the collegiate complex which covered more than two and a half acres.

Mentioned as early as 1060, Fotheringhay village appeared in the Doomsday book.  Its name derived from a clearing in the woods made for the purpose of producing hay.  There was a fording point of the Nene adjacent to the castle.  The village, its fortunes dependent on the fortunes of the castle and college, was thriving at the time of the funeral.  Although consisting of a single street lined with houses and inns, there were around 300 inhabitants, a sizeable village for the time.  A weekly market and annual fair were held here making it an important local meeting place and trading centre.

In the 16th Century Leland noted a village of 40 houses and a population of around 300.  But the dissolution proved fatal for the College and Collegiate church, which was left roofless and fell into ruin.  Queen Elizabeth I, visiting in 1566, was disgusted at the ruinous state of the graves of her Yorkist ancestors and ordered them removed to the still intact portion of the church, which had become the parish church.  She also ordered Fotheringhay’s first bridge to be built in 1573.  Edward VI, her half brother, had earlier established a renowned grammar school there.

The village fell into further decline, however, after the destruction of its castle, said to have been ordered by James I, whose mother, Mary Queen of Scots, had been executed there in 1587.  Cromwell further added to its destruction and so the population of Fotheringhay fell sharply at this time and has continued to fall steadily to its present population of 125 (2006 estimate).  The lordship of the manor and castle passed through the hands of the Earl of Newport, the Savilles, Hewers and Blackbornes before settling with the Belsay family.  Today the village is a quiet backwater, untouched by either the railways or the A1, which have both passed it by.

Margaret of York, the Diabolical Duchess by Christie Weightman