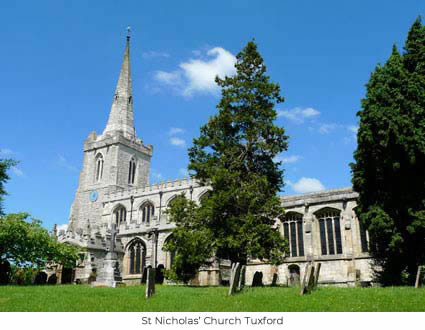 On the afternoon of 24th July the funeral procession came over a hill to see the buildings of Tuxford crowded around the brow of the hill opposite, the pale limestone steeple of the church dominating the view.  Around the small town was fertile clay country, with the rich agricultural area towards the Trent to the west and the forests of Sherwood, with hunting grounds and woodland crafts, to the east.  Windmills would have been a feature of this elevated landscape too.

Minutes later the mourners had climbed to the market place at the heart of Tuxford, with the Crown Inn on their right.  Already this was one of the principal inns on the road north.  At that time it was ‘chiefly built of timber and consisted of five bays of buildings the whole covered in thatch’.  It boasted many important guests, such as the young Margaret Tudor during her bridal procession to Scotland in 1503.  Doubtless it provided accommodation for many of Richard’s mourners in 1476.

The procession then turned left at the market cross to arrive at the fine south-west porch of the church of  St Nicholas.  Improvements to the aisle windows, and a new clerestory had been very recently financed by the then landowner Sir John Stanhope.  The chantry priests  from the small college established in the 1360s would certainly have joined the ranks of clerics officiating at the services for Richard and Edmund. The church appears to be the only remaining building in Tuxford which the funeral followers would have seen: in 1701 a devastating fire swept through the close-packed wood-framed structures of the main street.  Losses were calculated at £3000 and it was said that 120 houses, barns, stables and outbuildings were destroyed. 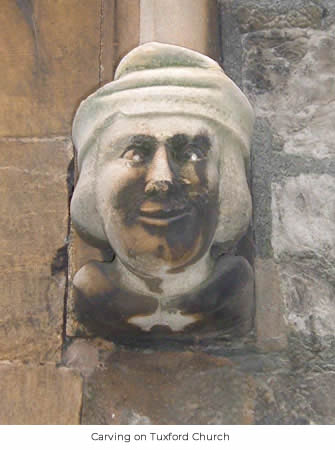 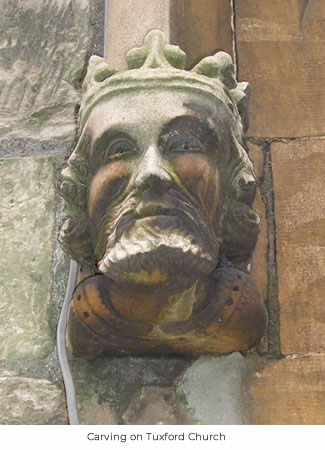 The construction of a new bridge over the Trent at Newark in the late twelfth century had brought much new north-south traffic through the settlement of Tuxford.  A large retinue starting in Newark in the morning might arrive at Tuxford, eleven miles away, for the night.  Royal messengers also travelled up and down the main routes.  Tuxford became an early and important postal centre, well before the mid-17th century when the General Post Office was established.

As well as a route centre Tuxford was a market town for local agriculture.  From 1218 there was a weekly market and a fair, and later a weekly cattle market.  A fine free grammar school was founded there in 1669 – now used to house the library.  In 1852 a market hall was constructed, but its heyday was short-lived.  Agricultural services like milling, growing hops for the Newark breweries and fruit-growing have been local specialities in the past.  Today the  agricultural life of the nearby village of Laxton is unique in that the communal open field system of the medieval and early modern period is still in operation.

If the weather had been bad in July 1476 the mourners might have experienced the same difficulties as later travellers, like Defoe, who complained bitterly of the sticky clay around Tuxford.  Eventually Turnpike finance in the eighteenth century brought better road surfacing and maintenance.  The small town, rebuilt in fashionable brick, prospered as a mail, coaching and carrying centre, the assembly rooms at the main inns busy with travellers and local society.  The Crown was rebuilt as The Red Lion after 1701, and since 1828 has been known as the Newcastle Arms Hotel.  In the 1850s there were 11 hotels, inns or taverns in Tuxford, a law court, a jail, and many small businesses serving the area. 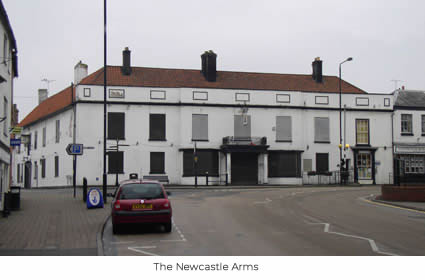 By 1869 there were only six inns in Tuxford as road transport suffered from the competition from the new railways.  But again Tuxford became a route centre – this time as a main railway junction with no less than four stations.  The railway has since passed the town by and in 1968 the huge A1 flyover, which slices Tuxford in half, carried away the passing road traffic too.  Tuxford’s centre is now very quiet and the commodious Newcastle Arms is boarded up.

http://www.ceramike.com/ Extracts from thesis on Tuxford History by Doris Sanderson 1947 and a chronology of events in Tuxford
www.nottshistory.org.uk.  includes: Tuxford:  A History of Nottinghamshire, by Cornelius Brown , 1898
Tuxford Church, Transactions of the Thoroton Society, 11, by Rev. J Standish, 1907