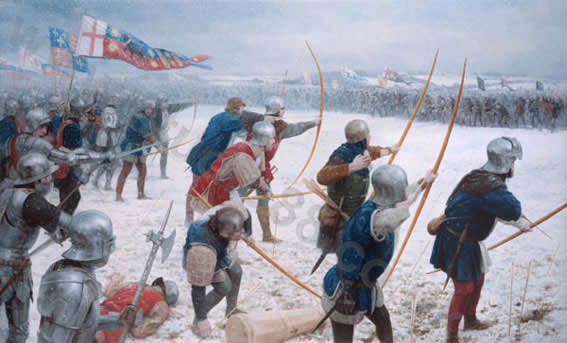 The conflict that we know as the Wars of the Roses (although that name has been coined more recently) lasted from the first Battle of St Alban’s in 1455 to the Battle of Stoke in 1487. It was a dispute over which branch of the royal family should rule England – Lancaster or York. Both branches were descended from Edward III. The Lancastrian King Henry VI was descended from Edward III’s third son, but Richard Duke of York had a good claim too, being descended both from Edward III’s second son (through his mother) and his fourth son (through his father).

Henry became king when only one year old in 1422, and a council governed England efficiently on his behalf. But when he began to rule in person in 1436, his policies were disastrous. He was a weak character, dominated by his wife, Margaret of Anjou. Law and order began to break down and by 1450 he had lost all the English lands in France. At about the same time, he began to suffer from bouts of mental illness, when he was unable to rule in person.

In 1460 Richard forced the House of Lords to agree that Henry’s son would be disinherited and Richard would become Henry’s heir. This unworkable compromise, called the Act of Accord, enraged Henry’s supporters; a new bout of conflict led to the Battle of Wakefield in December 1460, in which Richard was killed.

The conflict was fought with great savagery. with large numbers of the nobility killed. In 1460 -1461 alone, twelve noblemen were killed and six beheaded, over a third of the English peerage. The Battle of Towton, which reversed the Yorkist defeat at Wakefield, remains the bloodiest battle ever fought in England.

Modern painting of the Battle of Towton by kind permission of the artist, Graham Turner, website: http://www.studio88.co.uk/index.html