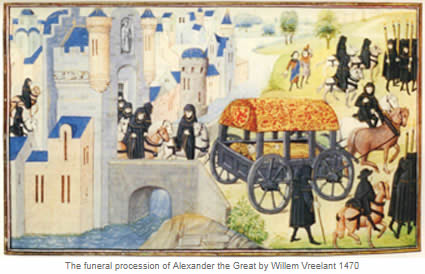 After the morning ceremonies at Pontefract, as at all the resting places on the route, the coffin and effigy were carried out of the church and placed in a funeral carriage, a four wheeled vehicle with a cage-like structure of hoops to protect them, draped in black velvet.  The velvet was drawn back sufficiently to allow onlookers to see the effigy.  Seven horses trapped to the ground in black pulled the carriage, some ridden by gentlemen holding banners bearing the deceased’s arms, whilst other royal, heraldic and religious banners were borne by other members of the cortege.

Chief mourner during the journey, Richard, Duke of Gloucester, rode at the head of his father’s effigy, followed by the lords of the land, including the Earl of Northumberland, Lord Stanley and Lord Welles. They were to stay with the body throughout, attend all the services and masses en route, and have the privilege of standing and kneeling within the barriers of the hearse.   The bodies were also escorted on horseback by the officers of arms and the kings of arms who attended the services, standing outside the hearse, along each side.  All the mourners were dressed in black with black hoods, the officers of arms wearing their colourful coats over their mourning habits.  Many poor men  on foot – four hundred according to one source – also accompanied the procession. They were in mourning habits but with worn out shoes and hose, and carried large torches.  At night sixty men with torches kept guard around the hearse.

Each morning the Bishops, in their pontifical robes, rode ahead to prepare the church at the next resting place. At each place local people and dignitaries, representatives of guilds and religious institutions, would come to meet and welcome the main procession, often forming processions themselves, following crosses and bearing relics and holy water.  At all these places dirges were sung in the evening and requiem mass held in the morning. Alms were given to the church, the poor and everyone who attended, whilst priests, choristers and bell ringers were rewarded for their part in the ceremonies.