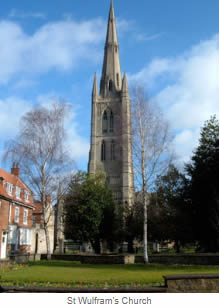 On Monday 26th July, having climbed the steep hill to Great Gonerby crowned by the church of St Sebastian, the procession would have seen the tall spire of St Wulfram’s Church, Grantham, rising from  the valley to the south.  As they descended the hill, the rest of the town and the River Witham would have been revealed below them.  They were greeted by the great and good of Grantham, which may have included the Alderman Henry Curteys and the burgesses, members of the Guild of Corpus Christi, the vicars of North and South Grantham, the chantry priests, the Greyfriars and the poor hoping for alms.

The body was taken to the church of the Greyfriars to the west of the market place. The Franciscans had been serving the town spiritually since 1290 and their establishment  included a church, belfry, cemetery, an aqueduct, gardens, closes, a kilnhouse, stables, and other tenements.  The magnificent church of St Wulfram’s, nowadays much as it was in 1476, adorned by the magnificent tombs and chantry chapels of the rich wool merchants, was not to be the resting place for the body of Richard Duke of York. 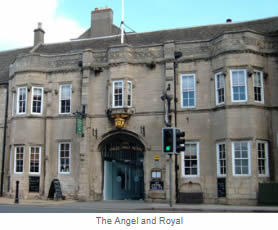 Grantham was used to providing hospitality to substantial numbers of important visitors. The route of the Great North Road through Grantham had become a well established route for royalty and the great lords travelling between London and their estates in the North; there were twenty one royal visits between 1200 and 1485.  Apart from accommodation provided by the Greyfriars, a hostel had been established by the Knights Templar which later became the famous Angel Inn, the present facade dating from the 15th century.

The town also provided for the needs of its inhabitants.  Near Spittlegate, on the route south from Grantham, was St Leonard’s hospital which originally provided for lepers but now catered for the poor.  There was also a choir school, later to be endowed in 1526 by Bishop Fox and eventually becoming known as the King’s School.  It was here that Isaac Newton later attended school. 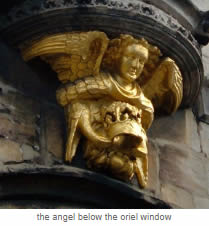 When Edward IV ascended the throne in 1461 he gave the Lordship and Manor of Grantham, which had always been a royal domain, to his mother Cicely, Duchess of York.  Unlike many towns, Grantham was never walled and the unfortified town was sacked by the Lancastrian forces marching south after the Battle of Towton.  Edward rewarded the town by granting it a Charter enabling it to run its own affairs.  The town had held a weekly market on Saturday since the 11th century; until 1330 it was west of the church but after that date moved to the present market place.  Grantham was still an important place for trading wool, and many merchants had dwellings in the town as well as owning surrounding manors  where they were farming sheep.

During the Civil War Grantham acted primarily as a garrison town for the Parliamentary army trying to subdue Newark and although it was taken by Royalist troops in March 1643, it was quickly regained.  Later a wide variety of trades grew up in the town, and to satisfy the need to transport coal economically a canal was completed in 1797 linking Grantham to Nottingham.  In 1815 Richard Hornsby and Richard Seamann established ironworks south of the town; at its height employing over 2000 people. There was further industrial expansion in this area stimulated by the new railway which opened in 1852, a main stop on the East Coast line.

Although much of medieval Grantham has disappeared, the medieval street lay-out, St. Wulfram’s church, the Angel (and Royal) Inn, the King’s School and several timber-framed buildings still remain.

Historical notes on Grantham and Grantham Church, by Rev. B Street, published S. Ridge, 1857
The Book of Grantham, by Michael Honeybone, published by subscription, 1980
The Making of Grantham: the medieval town, edited by David Start and David Stocker, to be published by the Heritage Trust of Lincolnshire 2010
Collections for the History of the Town and Soke of Grantham, by Edmond Turnor, printed W. Bulmer, 1806
The Royal Charters of Grantham 1463-1688, edited by G.H. Martin, published Leicester University Press, 1963