On the evening of 23 July 1476 the funeral procession of Richard Duke of York snaked down the steep banking into the flood plain of the small river, now known as the Ryton.  They crossed the bridge where they may have passed a cross and an old leper-house or chapel for the collection of alms.  On rising ground ahead to the right were the extensive Priory buildings dominated by a huge church with two towers.  On the road south beyond the Priory, the crossroads and High Street was  lined with houses, inns and shops.  At the far end of the town there was another Hospital for lepers, dedicated to St John, but in 1446 the foundation was re-established for ‘receiving and lodging poor strangers and pregnant women’.  An ancient building, now converted into cottages in the centre of the green, is thought to be connected with this hospital. 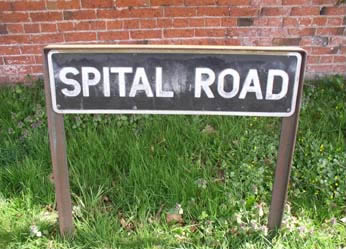 After the Norman Conquest Blyth was one of many manors in the region which William granted to Roger de Busli, one of his favoured knights.  Roger’s territories in this area were known as the Honour of Blyth.  However, although there are rumours of a castle built at Blyth, he chose his castle at nearby Tickhill as his stronghold and powerbase.

At Blyth Roger and his wife established a Benedictine Priory in 1088, the first monastery in Nottinghamshire.  It was a daughter house of St Katherine’s of Rouen and French monks were sent there.  The Prior was granted the manorial rights of the village, and tolls from a market and fair.  Roger may also have encouraged the development of a jousting site between Tickhill and Blyth, later licensed in 1170 as the only official northern tournament ground.  One duty of his Priory may have been to tend the injured knights from these ‘tournaments of Blyth’.

During the early Middle Ages Blyth become busy, populous and prosperous, an important town in the county.  Around 1300 there were fifteen merchants and a goldsmith living in Blyth.  Travellers of all sorts used the town’s facilities on their journeys along several medieval routes.  At Blyth Priory, where kings with their large retinues often stayed, there was a guest hall for the entertainment of strangers as well as apartments for poor travellers.  Inns there served a wide travelling population: the Bishop of Durham’s accounts of 1274 show a large payment for a night’s accommodation for his retinue at a Blyth inn, possibly the Angel.  Nobles and gentlemen moved between north and south to administer their estates.  Musters of troops during periods of unrest were commonplace in the area. 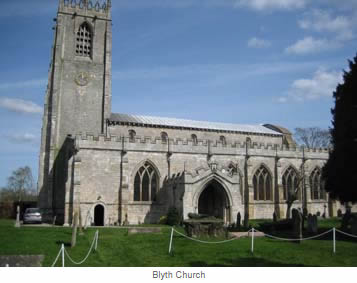 However, Blyth Priory’s allegiance to an ‘alien’ foundation made for poor local relations, particularly during wars with the French.  The behaviour of monks

was often criticized  and disputes arose between the vicar of Blyth and the Prior over tythes.  From the end of the thirteenth century the Priory church was extended and reorganised in order to meet the demand of the Blyth population for greater independence.  By 1476 parish and Priory worshipped separately in the great church, with a new dividing east wall freshly decorated by  ‘doom’ images of judgement day, and a second bell tower for the parish at the west end.

At the dissolution of the monasteries the Priory passed into private hands and the priory church building was demolished.  Since then all evidence of the Priory has been gradually lost.  Alternative north-south routes were emerging to compete for the Blyth traffic and in the eighteenth century the turnpiked Great North Road went via Retford to the east.  However, several large inns from the coaching age survive to testify to Blyth’s continued significance as a staging post.  In 1814 there were still sixteen coaches passing through Blyth each day, but there was no market and no fair.  In the nineteenth century landowners protected the village from the intrusion of the railway.  Today the modern village of Blyth seems a tranquil backwater well hidden from the line of the new AI just over the hill.

‘Blyth Priory’ by Jean Reid in Sanctity and Scandal: Medieval Religious Houses of Nottinghamshire edited by David Marcombe and John Hamilton.
‘Hospitals: Hospitals in Blyth’ in Victoria County History: A History of the County of Nottinghamshire: Vol 2 edited by William Page
A Tour of Blyth Church available in the church of St Mary and St Martin, Blyth.