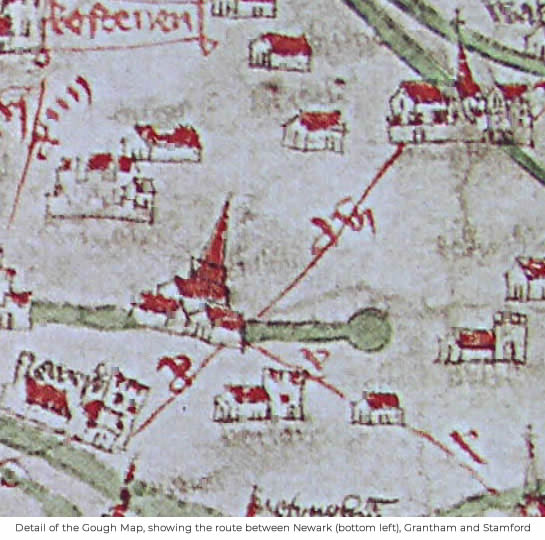 It is impossible to know exactly the route that the procession used over five hundred years ago. However it is known that a major route existed  from London to the north-east passing through Stamford and Doncaster as shown on Matthew Paris’s map of 1250 and the Gough map of about 1360. The towns where travellers could rest are pictured on these maps, and the distances between centres shown, although the roads themselves are not marked. Old Roman roads had remained in use, but there was also a growing network of other routes linking communities and market centres.    All classes of society would use these routes, royalty, nobility, the clergy, merchants, pilgrims, soldiers, pedlars and drovers.

Even the most well-used routes might not be defined clearly on the ground, especially where they crossed unenclosed heaths, commons or forests in sparsely populated areas.   There was little major road engineering in the medieval period and no national system for road clearing and maintenance. The king would remind local lords and churchmen of their responsibility to maintain his highway and maintenance could also be part of manorial agreements. Tolls and gifts or legacies from wealthy merchants might also contribute to the upkeep of roads. 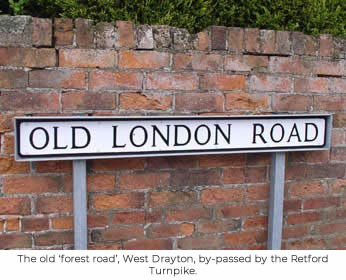 Maintenance was patchy.  The most significant construction work was of bridges over important rivers, usually in wood at first, and later in stone.  Elsewhere fords and ferries were maintained, although hold-ups could occur at times of bad weather or flooding.  Occasionally rough causeways were raised across flood-plains. New tracks used ridges or followed hillside contours above valleys. Travellers had the right to pass over cultivated land if the usual route was impassable.

By 1200 with the Exchequer and Chancery permanently based in London there was a need to deliver urgent documents to the King and his court as it travelled around the country. Messengers changed horses regularly to achieve the greatest speed; here was the origin of the postal system.

Regular traffic like this gradually produced a network of main roads which were shown for the first time on road atlases in the 1670s.  Most radiated from London, with cross-country links between these main spokes. Great coaching inns were established to provide hospitality for travellers, stabling and fresh horses.

Detail of the Gough Map by kind permission of the Bodleian Library, University of Oxford, MS Gough Gen. Top. 16