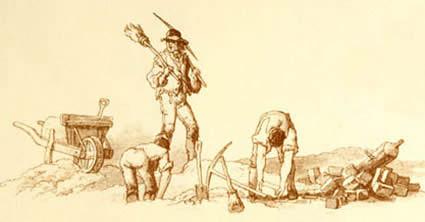 The funeral route follows a major artery between London and the north.   As the population grew and demanded speedier transportation of goods and people and faster communication, many roads became inadequate. The parish system of statute labour set up in 1555 was not designed to to maintain long-distance routes and heavy traffic. Some roads were particularly bad: as late as the mid -1720s Defoe described the road from Stamford to Grantham, Newark, and Tuxford in the clays as ‘very deep and in some seasons dangerous.’  By this time groups of interested individuals such as local landowners and merchants requested powers from Parliament to establish Turnpike Trusts. Roads were gated and tolls collected.  From 1787, the Great North Road was gated the whole way from London to Edinburgh. This method of  financing road building and maintenance  remained the norm until the 1870s.

Better road-making techniques were developed by road-builders like John Metcalf, Telford and McAdam.  Special projects were financed, like the 125-arch kilometer-long causeway designed by John Smeaton across the wide Trent floodplain at Newark, completed in 1770 at the cost of £12000.  It was an enormous engineering feat: in his 1778 edition of Defoe’s Tour, Samuel Richardson stated ‘whether we consider the greatness or the utility of the work it may be looked upon as one of the greatest of the kind ever executed in England.’ Sometimes the main route north was altered: theTurnpike set up in 1766 diverted the new Great North Road away from the Old London Road through the forest to Blyth in order to pass through Retford.  Immediately it opened it was carrying 90 coaches a day plus stage wagons and packhorses. 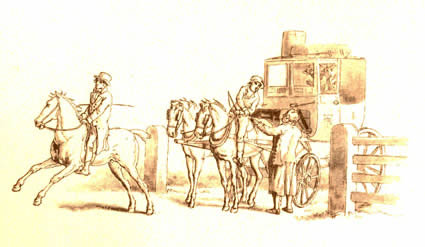 The heyday of the Great North Road started in earnest when the Royal Mail began to be carried by coach in 1784. The mailcoach journey from London to Edinburgh could be made in 60 hours, and there was a growing network of provincial mailcoach routes. Passengers were carried on these coaches so that much of the population had the opportunity to travel quickly and quite cheaply.  Privately-owned coaches became a symbol of social status, and by 1765 there were nearly 20,000 private coaches and chaises in addition to the stage coaches and hackneys.

Towns like those on our route benefited: shops and businesses flourished; new civic buildings were constructed and private housing expanded.   The great coaching inns, many built or rebuilt in this period offered meals and beds, and became social and business centres. Blacksmiths, ostlers, coach repairers and postboys working in the stableyards provided for the needs of the horses and coaches.

Illustrations from engravings by W.H.Pyne in ‘The Turnpike Age’ published by The Luton Museum and Art Gallery, 1977. With their kind permission.

Appendix to Volume II, A Tour Through the Whole Island of Great Britain, by Daniel Defoe, edited by Pat Rogers, 1989
‘New Improvements’, Chapter 9 in A Polite and Commercial People, by Paul Langford, Oxford 1989