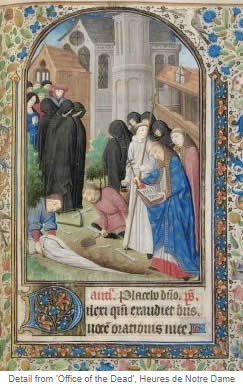 The next day, 30th July, the funeral services were held with three masses, one for Our Lady, one for the Trinity and a requiem mass.  A fine sermon was given by Thomas Rotherham who was Bishop of Lincoln and Chancellor of England. Pieces of cloth of gold were offered to the body.  Seven pieces five yards long, provided by the King, were delivered by Lord Hastings, his chamberlain, to the coffin.  Pieces of cloth were offered by the Queen, the attendant dukes, earls, barons and squires, according to their status.

Richard’s coat of arms, shield, sword and helmet, symbols of his knightly achievements, were then handed to the noble mourners by various kings of arms and heralds to present as offerings.  Richard’s black war horse, richly trapped to the ground in his coat of arms, was ridden into the church by Lord Ferrers, armed and carrying an axe in his hand, point downwards.  He rode to the doors of the choir and handed the horse to a deacon.  The harness was offered at the altar.

The King offered his mass penny for the purchase of candles, wine and bread, and made his obeisance to the body.  He was followed in this by the Queen, “dressed all in blue, without a high headdress”.  Then their daughters, the barons and foreign ambassadors gradually filed past the coffin and offered their mass pennies.  Surviving reports do not mention the lowering of the coffins into their graves, York’s in the choir and Rutland’s in the Lady Chapel, but this must have followed the ceremony.