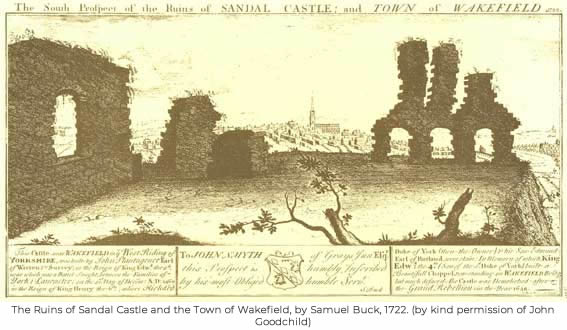 Sandal Castle was built in the early 12th century by William, second Earl Warenne, after receiving the manor of Wakefield from Henry I for his support at the battle of Tinchebrai in 1106. It was a timber motte and bailey castle, rebuilt over the course of the 13th century in stone. After the Warenne family died out without any legitimate children in 1347, the castle eventually came into the hands of the Dukes of York. There is little evidence that they used the castle other than for administrative functions, such as holding manor courts and managing the manor.

Excavations in 1893 by local historian J W Walker established the approximate ground plan of the castle, and in 1964-73 the castle was fully excavated, exposing ten phases of development at the castle, back to the timber buildings of the first castle. The archaeologists found no evidence of the Battle of Wakefield, as the battle was fought outside the castle. But they did identify a phase in which buildings had been cleared out and rubbish dumped in the inner moat, dating approximately to 1400 – 1450; could this have been the result of a change of management in 1460?

There was a short period of renewed life in the castle when Richard III set up a permanent household at Sandal Castle in 1484. A new tower was added to the keep protecting a well, and a new bakehouse and brewhouse were built, but the death of Richard III in 1485 brought any new development to an end.  After that, building surveys in the 16th century show the castle was left to decay, and by 1604 even the Constable of the castle had moved out.  The castle came briefly back to life in the Civil War when it was garrisoned for the king, but as soon as the besiegers brought in cannon in 1645, the garrison quickly surrendered. The castle was already partly in ruins, and what was left was deliberately demolished.