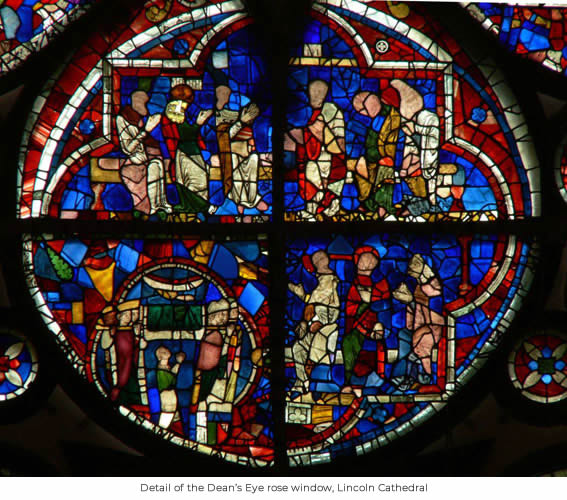 It was always important for people of high status to be buried with their family or their peers, so long funeral journeys were not unknown. One funeral journey we know of was that of Hugh, Bishop of Lincoln; whose body was taken over six days from London to Lincoln in 1200. The stained glass in the Rose window at Lincoln records his funeral and canonisation. When King Edward I’s beloved Queen Eleanor died near Lincoln in 1290, her body was embalmed and brought back to London for burial in Westminster Abbey. A memorial, called an Eleanor Cross, was put up at each place where the body rested. The route of Richard, Duke of York’s later reburial procession overlapped that of Queen Eleanor’s body, as both rested at Grantham and Stamford, but neither of those Eleanor Crosses survive.

Although Richard had aspired to become king, he was not buried at Westminster Abbey which had become the burial place for the kings of England. Instead his son, Edward IV, reburied his father at Fotheringhay, the traditional resting place of the York family.

By the15th century the protocol for ceremonies had become very important. The detailed descriptions of funerals and other ceremonies that survive from this period were written to help with planning similar events in the future. It is possible that the arrangements for Richard’s funeral were influenced by Burgundian ceremonial. Richard’s daughter Margaret married the Emperor Charles V, ruler of Burgundy, the most powerful ruler in Europe. She didn’t attend her father’s reburial in 1476, but she met her brothers several times in 1475 when they came to the Continent to campaign in support of Charles V, so she may have been involved in the arrangements. When Charles died in 1477, a procession she organised in his memory included similar elements to her father’s procession, including paupers dressed in new black mourning clothes.