In the late afternoon of 27th July the procession approached Stamford down the street called Scotgate, lined with medieval houses.  At the bottom of the hill stood Queen Eleanor’s cross, erected in 1293, a reminder of a previous royal funeral which had also rested at Stamford.  In front stood the stone walls of the town. These may have shown the effects of a  Lancastrian raid of 1461: there is dispute about how much damage was caused in the town.  Having passed through the still impressive St Clement’s gate, the cortege ascended into the heart of the town.  At the summit stood All Saints Church, in process of restoration.  The main benefactors of All Saints were wealthy wool merchants John and William Browne, whose effigies in brass were soon to adorn the interior.  Off to the right lay the ruins of Stamford’s Norman castle, so badly damaged that it had to be demolished only a few years later in 1483.

The procession now entered the main market place, known today as Red Lion Square.  Here, in front of the imposing timbered Guildhall, the dignitaries of the town, representatives of all itschurches and religious houses, along with the noblemen and richest merchants of the area, all in black, welcomed the royal procession.  All the archers of the Crown stood ready nearby.  The town had close relations with the Yorkists: it was a royal borough and just a few years earlier in 1463 Edward IV had granted the town a new charter. 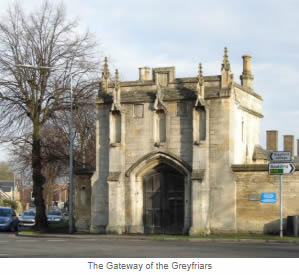 After greetings were given and speeches made, the procession moved off left, along the High Street.  It passed St John’s church, with its exceptional angel carvings, and St Michael’s.  The High Street was a major shopping thoroughfare with intermingled shops, gabled houses, yards and passageways.  The medieval halls, where many of the guests would have stayed, were located nearby.  This led directly into St Paul’s Street, past Brazenose College, where an attempt had been made to establish a breakaway university in the 14th Century.  The gates of Whitefriars lay ahead but the procession made a sharp right turn into the great gates of Greyfriars Franciscan Priory, in whose chapel the hearse was to rest for the next two nights.

Stamford had been founded as a fortified Danish settlement in the 9th Century and became one of the controlling boroughs of the Danelaw. An early charter had been granted in 972.   It was an important crossing point of the River Welland by ford and later bridge, and had become an inland port, trading mainly in wool, iron and pottery.  Fine cloth was made and sold here and merchants from all over Europe attended its annual fair. There were several other market places where markets were held according to the day of the week and the goods on offer.   The town also had a Jewish quarter specialising in money lending.  It was also an important religious centre with fourteen parishes, six chapels, four friaries and two monastic houses.  The substantial Browne’s Hospital for poor men in Broad Street, was nearing completion at the time of the funeral.  Thirty manors with their lords lay nearby and the town itself had many fine buildings, houses, halls, shops and undercrofts, and a lodge of the Knights Templar, later to become a renowned coaching inn, the George.  Ermine Street lay nearby, whilst the Great North Road passed through the very centre of town until the 1960s, making it a centre of transport and communication.

Stamford had been one of the 10 largest towns in England in the 13th Century with a population of around 5000, and was still important, if somewhat in decline.  It lost its position as a port when the Welland silted up and the wool trade moved away.  In 1377 after the Black Death the poll tax was paid by 1,340 adults, suggesting a population of perhaps double that figure. Yet despite that decline it was the most populous centre on the funeral itinerary. 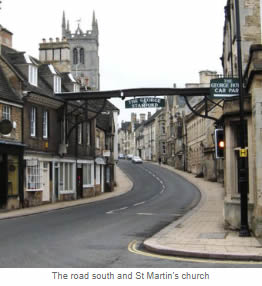 Stamford regained some of its stature when Elizabeth I’s chief minister, Lord Burghley, built his great house on the edge of town in 1565.  The Queen visited several times and the Burghleys benefited the town, building almshouses and adorning the churches, St Martin’s in particular.  The Civil War left Stamford relatively unscathed although Cromwell besieged Burghley House and a fugitive Charles I visited in May 1646.

After the Restoration, Stamford’s fortunes revived as the river was made navigable again by canal and the Great North Road was improved.  The town became a great coaching centre, famous for its inns, such as the George, Bull and Swan, the Crown and the London Inn.  The arrival of the railway in 1848 diminished some of this trade and the A1 now bypasses Stamford, which is nowadays a modest but handsome market town.