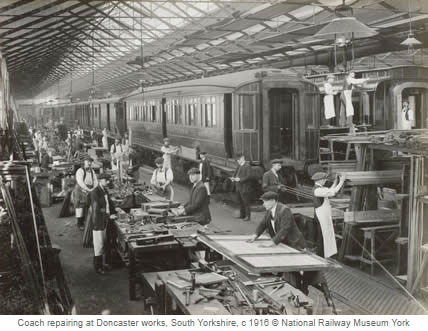 The traveller along the funeral route would have found many of the towns almost unrecognisable after 1850 and the building of the Great Northern Railway between London and Askern (north of Doncaster), today’s East Coast Main Line. Some, such as Doncaster, Newark and Grantham, which were on the route of the railway, became key towns for manufacturing heavy industry, or the transport of produce; others, such as Stamford and Blyth, were bypassed by the railway, and declined in relative importance.

The speed and scale of the changes brought by the railway were considerable. Its route from London, through Peterborough, Grantham, Newark, Retford and Doncaster, was shorter, flatter and quicker than the existing Midland Railway route through Birmingham, Derby and Sheffield to York. The GNR’s building took only six years, the London terminal at King’s Cross being opened in 1852.

The impact on the coaching industry was dramatic. There was little further need for coaching inns with teams of relief horses, or for the trades which coaching sustained. Until the widespread use of the motor coach and car after the First World War, their fortunes declined. By contrast, transport of animals and food took place through the railway marshalling yards of Newark, Grantham and Peterborough; bricks, carried by rail, made up the new terraces in the railway towns, to house industrial workers in factories and mines. Doncaster became unrecognisable, with its railway “Plant” works, manufacturing railway engines and rolling stock, overlooking the Grey Friars site where Richard’s body had rested.

Blyth became a small, bypassed community, though Tuxford, with four small stations, still thrived until a new bypass cut through the community. Newark was increasingly dominated by its lineside Malt Works, and Grantham divided by the railway embankment, but Stamford, on a branch line from Peterborough, was little changed as a modest market town.