One source says that over twenty thousand people came to Fotheringhay on that day, and five thousand people were given alms of a penny each.  Over fifteen hundred people were accommodated in pavilions and tents specially constructed under the supervision of the King’s pavilioner, Richard Garnet. 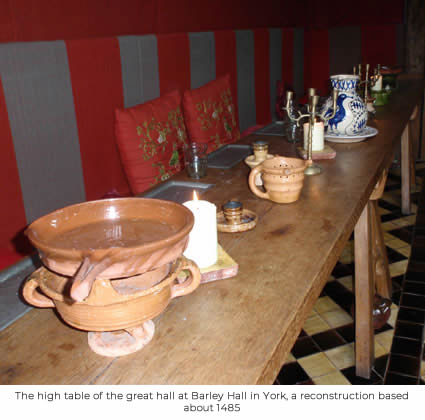 After the ceremony a great feast was prepared and served, displaying the scale of the king’s largesse.  Near the pavilions an outdoor kitchen range had to be constructed by masons, and all the kitchen equipment was supplied from London.  Many departments of the king’s household were involved in the planning and preparation: the actuary catered for the fish and meat, the poultry provided birds and small meats, the butlery the drinks and the saucery garnishes for the dishes.  Most of the provisions and other items were bought in London from merchants there, such as John Lamplow, grocer, who supplied all the spices, and William White, mercer, who supplied all the linen.  Certain workers, such as the team of cooks, were hired in London, and had to be conveyed to Fotheringhay and back. Much carting of goods between both London and the local area to Fotheringhay must have been involved, including some food items provided by merchants in Stamford.

Huge quantities of food were consumed. The accounts mention thirty one tuns of ale, forty nine beef cattle, ninety calves, two hundred and ten sheep, two hundred piglets, and large quantities of fish including pike, salmon and shellfish, and poultry including hens, capons and cygnets.  Forty pipes (barrels) of wine, provided by the royal cellar, were drunk, and quantities of bread, honey, salt, milk, cream, butter and eggs consumed. Two thousand wooden bowls and clay pots were needed to serve this in, as well as various brass pots and bowls, and the kitchen needed one hundred and eighty two quarters of charcoal in order to cook it all. Candles were provided to light the tables as evening drew on.

The treasurer of the royal household, John Elrington, kept accounts of the cost of the feast as paid by his department and these have survived.  He totalled this as £331 1s, but this only partially represents the cost of the feast, let alone the funeral as a whole. Other officers were compiling their own accounts which have not survived.  Additional expenditure was necessary to pay for the effigy and its robes, hearses at all the churches where the procession halted, huge amounts of candles burnt, mourning habits and hoods and expenses of those accompanying and receiving the cortege, the vast amount of alms dispensed, wine at the feast, flags, banners, insignia and more.