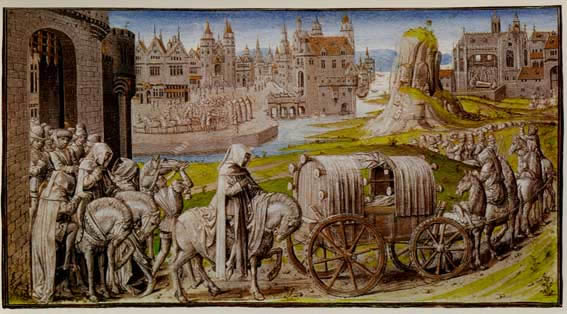 A journey following the funeral route of Richard, Duke of York, killed 1460, reburied at Fotheringhay 1476

Richard, Duke of York, was killed at the Battle of Wakefield in 1460 but later exhumed by his son, Edward IV. The body was taken with great ceremony from Pontefract to Fotheringhay, resting each night at Doncaster, Blyth, Tuxford le Clay, Newark, Grantham, Stamford and finally being reburied at Fotheringhay. A huge funeral feast for 15,000 people followed.

In 2010 Wakefield Historical Society retraced that journey on the anniversary dates of 21st-29th July to commemorate the 550th anniversary of Richard’s death. Each day included visits to places of interest and a chance to walk some stretches of the original route. Each evening included a performance of a medieval Vespers of the Dead, in the church where the body rested if possible, as well as a talk by an invited lecturer.

Every effort has been made to trace, acknowledge and gain permission from copyright holders of images on this website. Please contact us about any infringements. errors or omissions