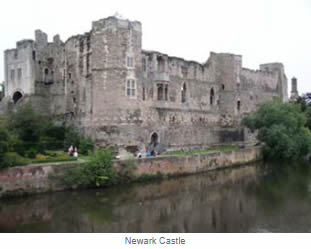 On the afternoon of 25 July, 1476, Richard Duke of York’s funeral procession was negotiating the simple causeway which crossed the wide flood-plain of the Trent.  From the fashionable oriel window high up in the newly-improved living quarters of Newark castle, the household of the Bishop of Lincoln would have watched them expectantly.  At this time the Bishop of Lincoln was Thomas of Rotherham, also Edward IV’s Lord Chancellor, and later to become the Archbishop of York.  In the accounts of the funeral he was the first-named of the bishops to receive the procession on its eventual arrival at Fotheringhay Church.

Steadily the file of mourners crossed the Trent bridge below the castle, and entered the town through the western gate of the town walls, passing on the left the fine 12th century castle gateway and the moat.  Crowds would have greeted them along the narrow streets of the town as they made their way up towards the ‘great church’, the town’s fine parish church of St Mary Magdalene beside the market place.  Here the many priests of the town and neighbourhood would have been present as the bodies were received into the church.

This late medieval town is still recognisable today.  The crowded central streets are still lined by a good number of timber-framed shops and inns.  Several of these, such as the Woolpack, the White Hart or the Governor’s House, would have been Newark’s finest vernacular buildings of their time, newly built or extended as inns or merchant’s homes, some large enough to house the entourages of royal, noble and ecclesiastical travellers.  Building works in the church were also slowly approaching completion: the chancel was the last section of the present church to be finished some years later.  Even today the great market place boasts a lively Wednesday market.  But some landmarks, like the town walls, have disappeared.  So too has the Hospital of St Leonard, first established as a leper hospital outside the city walls along the river, and active in the care of the poor throughout the medieval period. 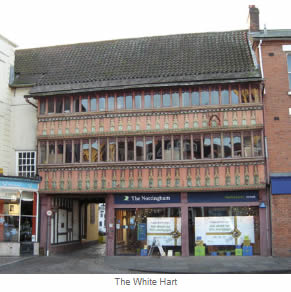 Newark was not granted a charter until the Tudor period, but the town seems to have flourished under the Lordship of the Bishops of Lincoln.  Alexander the Magnificent, Bishop from 1133, built the Castle and later the bridge below.  Travellers could then use the convenient new river crossing, the lowest bridging point on the Trent, making north-south routes from London to York and Edinburgh more direct.  Sited beside a major navigable river and at the intersection of important land routes, trade and business flourished there.  Weekly markets were held and there were two annual fairs, one of five days and the other of two.  Despite the ravages of the Black Death in the mid -14th century Newark had an adult population (excluding beggars and clergy) of 1,178 in 1377, making it an extremely large town for the period.  By the late fifteenth century wealthy citizens operating in powerful guilds organised many aspects of town life and contributed through legacies and gifts to the maintenance of its fabric.

However, Nottinghamshire saw much of the upheaval and disorder caused by the Wars of the Roses: the Trent appeared to divide the country  between the warring factions, with Lancastrians to the north and Yorkists to the south.   In March 1470 a Lancastrian rebellion in the North brought Edward IV with an army through Newark on his way to York, a move which led to his temporary exile in France when his retreat south was cut off.  In 1471 the town was occupied for some days by a Lancastrian contingent led by Lord Oxford and the Duke of Exeter, but they left to join with other forces before the battle of Barnet at which Edward regained his throne.  It was not until a decade after the funeral that the last engagement of this long and complex civil war was fought at Stoke near Newark in 1487.  Later, in the Civil War of 1642-46, Newark’s strategic importance was still evident. The large royalist garrison based in the town famously launched many offensives and survived three sieges there. 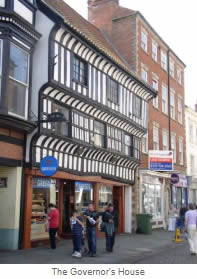 Over the years Newark has remained a prosperous main centre for local agricultural markets, and has provided a wide range of further industries and services to support the needs of travellers and traders. In the eighteenth century Newark grew and prospered: new, elegant civic buildings and homes lined the streets.  The coming of the railway in the mid-19th century allowed for the expansion of local industry, in particular malting and brewing.  Newark is still a major station on the main line between London and Edinburgh, although road traffic on the A1 bypass now skirts the town to the East.

www.nottshistory.org.uk A Guide to the Antiquities of Newark, Thomas M Blagg, 1910