The opening talk of the 2019-20 season was given by Gaynor Haliday, author of Struggle and Suffrage in Wakefield, on ‘Three Worthy Women of Wakefield’. 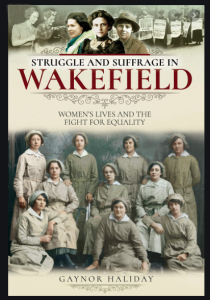 Our first worthy woman was Phyllis Lett. Born in 1883, educated by a governess alongside her other high-flying siblings and later at Wakefield Girls’ High School. She gained a scholarship to the Royal College of Music in 1903. By 1906 she had made her Royal Albert debut in Mendelssohn’s oratorio, Elijah. She became a favourite of Edward Elgar, performing many of his works, including Sea Pictures and Dream of Gerontius all over the country.

In 1910 she made a recording on wax cylinder for Pathé Frère Pathéphone Ltd and by 1913 was principal contralto at the Proms, then held at Queen’s Hall. She performed closer to home in Huddersfield and at Wakefield Corn Market, with Wakefield District Choral Society, both in aid of the War Relief Fund. She was known to have a large repertoire including patriotic songs appropriate to the occasion. Her successful career was reflected in her London residence and her need to employ a secretary.

In 1922 Pathé reworked her recordings, now 12 years old and poor quality, into a seemingly new record. Lett sued for libel and breach of contract due to the damage to her reputation and loss of engagements. Elgar gave evidence at the trial, warning the judge to ‘brace himself’ before listening. Pathé settled out of court, destroyed the recording and paid the court expenses.

Whilst continuing to travel and perform she met her future husband, Charles Rupert de Burgh, an Australian and former soldier who had served and been wounded in Gallipoli gaining the medal for Gallantry. She gave a farewell concert  in March 1925 and then emigrated, but not before producing a new good quality well-reviewed recording for HMV which still exists as a digital download.

Wakefield at the turn of the 20th century had a particularly high infant mortality rate, with 1 in 5 children dying. Gaynor’s next subject, Marguerite de Flemyng Boileau, attempted to change that.

Born in 1875 from an Irish family she received a BA from Brighton High School, and studied privately for a sanitary inspection qualification from the University of London. On arriving in Wakefield she began a series of home visits (6000 to 900 babies in her time there). She was respected for her tact and enthusiasm, her ability to listen and give good advice both. She made sure that mothers knew premature death was not a foregone

conclusion. Unusually it was not poverty that made the difference, nor ‘drunken mothers’ or dangerous environments, but ‘crass ignorance and devoted affection’. Babies were being overfed, some 2-3 times per hour, and weaned far too early, one 4-day-old being fed a tomato. Their crying being taken as hunger pangs and then fed again; gin was used as a ‘soothing syrup’.

Boileau began an association, ‘Babies Welcome’ in 1906, the first of many in the country, to help pregnant mothers put aside money for their baby’s arrival. Wakefield Council were generally complimentary and happy to employ extra sanitary inspectors, but unwilling to pay for them or provide other financial help, but she raised money from subscriptions and donations from the women. Improvements followed, though slowly, and were commended in the London Times. She was also able to persuade families to use savings from multiple-worker households to buy bigger houses with more room to minimise sanitation problems.

Boileau left Wakefield in 1910. By 1915 5 health visitors had been employed to perform home and school visits.

Marguerite de Flemyng Boileau died in 1932, leaving little personal information except a will and an obituary. She became Boileau-Lessy and had a daughter, Christin Lessy. The spelling of her daughter’s name may indicate a German father and therefore a reason for the lack of records at this time. Christin became a Queen Alexandra nurse in Egypt and post-war in Palestine.

The last and only Wakefield-born subject was Gwendoline Beaumont, nee Haworth, an anti-suffragist turned would-be politician. In her youth she wrote A Victorian Young Lady’s Opinion of the Male Sex dividing men up into categories such as rabbits, rats, nincompoops, manlets and finally Man. This reflected her opinion that the vote for women was counter-productive as they should just get men to do what they wanted, although she later published ‘Home and Politics’ to encourage women into politics.

When her husband Gerald, partner in Greaves, Atter and Beaumont solicitors, went to war she and her sons moved into Hatfeild House with her father-in-law, and sister-in-law suffragist Florence Beaumont. They, perhaps surprisingly, got on well and bonded over their dislike of the activity of suffragettes.

Post-war, Beaumont threw herself into public life, becoming part of the Women’s Advisory Committee and Woolley Parish Council. She wrote to the local press about issues that affected women and children, particularly health and education. Her sons had been privately educated, but she recognised that many lacked that opportunity and for others more technical than academic study was needed.

In 1935 she decided to stand for election in the Rothwell constituency. She was the only women candidate for the National Party against William Lunn who had held the post since 1918, and was not a fan of women in politics. She campaigned on her progressive policies on work and education, canvassing door-to-door. People (and the press) were polite but dismissive. She would have preferred heckling as this could be argued against. Comment was passed that ‘a woman’s place is in the home’ but she replied that she was a widow (Gerald Beaumont had died in 1933) and her sons were grown up. Lunn won the election in a landslide. Beaumont had known that her campaign was doomed but felt moved to fight it anyway. The first woman to become an MP in Yorkshire was Alice Bacon, the subject of our previous talk, given by Rachel Reeves, MP and Rothwell has yet to return a woman MP.

There was time at the end for questions about aspects of the individual women’s lives but also about how Gaynor had gone about researching her book, one in a series about women’s lives in various towns. Without knowing what she would find she trawled through West Yorkshire Archives and Local Studies library for the archives of the Women’s Co-operative Guild, newspapers and council minutes finding the first mentions of women, and teaching appointments at Wakefield Girls’ High.

Gaynor gave us a substantial talk full of information covering a wide range of aspects of the lives of women in Wakefield between 1850 and 1950.