The Borough Waits and Their Music, by Leeds Waits
11th December 2019 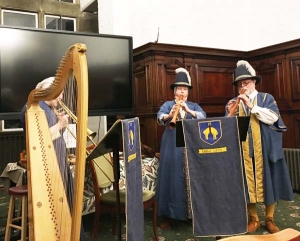 WHS members arriving at the Town Hall for our December meeting were greeted by a beautifully trimmed Christmas Tree, festive drinks and mince pies, and thankfully Central Heating. Wakefield Historical Publications were available to buy as were prints of paintings by Bill Church, father of Lorraine Simpson.

For the talk ‘Borough Waits and their Musicians’, Leeds Waits leader, Alan Radford was our main speaker, with occasional informative asides from fellow musicians, Joanna and Pam. They had brought numerous instruments and interspersed the talk with songs and brief excerpts.

Waits were official town musicians performing at civic occasions. Leeds Waits existed from 1530-1835, sponsored by the Mayor and ‘Corporation’ of Leeds. The current group was revived in 1983 by Alan. They specialise in playing authentic instruments in authentic dress and often at similar events to those of the original organisation. No current Wakefield revival exists, although Alan suggested that if any of our members had secret Crumhorn-playing skills we could form one.

Waits originated in the middle ages as watchmen employed to guard castles and towns, carrying loud instruments such as a rauschpipe on patrols to call the hours or to signal for help. In the 1200s, Wakefield had waits patrolling the streets. The role slowly developed from guard to musician over time. York, Norwich, Chester, Coventry and London all had civic musicians by the 13th century. Waits could also be employed to give wake-up calls.

Civic duties could include playing for ceremonies, royal and mayoral processions, quarter days and for mystery play cycles. Wakefield Waits would undoubtedly have played for performances of the Wakefield Cycle accompanying players and crowd in between stages. The famous Coventry Carol (Lully Lulla) was played for this purpose, although composed earlier, and performed for us. During the York Cycle 10 different groups of waits played in the transitions from scene to scene.

Accounts of waits, or ‘historioni’ often exist scattered in the incomplete archives of their patrons from civic authorities, castle, abbeys and aristocratic estates, such as Temple Newsam. Also from records of performances, newspaper reviews, play bills and records of provision for uniform etc. Waits, when not performing their core duties, travelled long distances to earn money, visiting houses on well-defined routes used by acting troupes and other entertainers along the way.  Waits were cultured, being frequent visitors to the assembly rooms of large urban centres, travelling to London & Newcastle, attending masques and mixing with professional acrobats and dancers.

Patronage was especially important during the Elizabethan/Jacobean period when ‘itinerancy’ was seen as vagrancy and outlawed. Badges identified individual troupes and sponsors and granted legitimacy. One such badge for Wakefield Waits is held by Wakefield Museum. Waits could also be identified by their livery, overcoats with long sleeves in matching colours. The revived Leeds Waits wear a cast of an original badge from Leeds Museum showing their symbol, the hanging fleece, also displayed on their banners, and livery which is a reproduction from the time of Charles I. Accounts exist from both Leeds and Wakefield authorities for the provision of livery for their waits. Many patrons at the time would have provided only the long sleeved overcoats, but Wakefield particularly provided everything down to stockings and shoes. Quite an expensive outlay. It is not surprising that by the early 19th century a willing to pay regular amounts reduced. In Wakefield payments were withdrawn by 1813, although waits still existed for another couple of decades.

Waits were virtuoso multi-instrumentalists, using naturally higher or lower, louder or softer instruments as the occasion demanded. They learned through apprenticeships and sometimes became teachers. Their instruments developed over time into a shape we would recognise now, from shawms to oboes, from sackbuts to trombones. Harps change in size and complexity and drums in range. Fiddles and recorders remain largely unchanged. A selection of these instruments were played or on display on the night, including Flemish bagpipes (reproduced from  a Breughel painting) and a hurdy-gurdy. Waits probably began playing by ear and memorising the hundreds of tunes they would be required to play. As music gained in complexity sheet music became necessary, although familiarity with common chord progressions meant musicians could improvise. Individual groups had signature tunes, ‘Here we coma a-wassailing’ being the tune for Leeds.

Evidence can be sparse and difficult to find. Some accounts were destroyed during the dissolution of the monasteries More detailed later records exist however, including individual names and families of waits. The earliest name we heard was from the 16th century, but most were mid-18th to 1835 when waits were officially abolished by the Municipal Corporations Act. One such was Thomas Crawshaw, listed as a musician in Leeds trade directories from 1798, and after his death in the workhouse,  in his obituary in 1858, where it states how well attended his funeral procession had been. One unusual and invaluable piece of evidence is the a book of manuscripts held at the Brotherton Library: a collection of pieces of music bearing the names of the Crawshaw family, including Thomas.

Questions followed on training, construction of instruments, the destinations where waits both ancient and current had played and the feeling of performing in a minstrel’s gallery (not much head room). Although there is no direct evidence it is possible that the Dissolution of the Monasteries may have provided a surplus of trained musicians who subsequently became waits. The ubiquity of modern waits groups was discussed: there are 14 groups currently in the International Guild of Town Pipers  and 4-5 unsubscribed groups. Instruments had been excavated from the Mary Rose: did waits go to sea? The instruments may have belonged to soldiers so we have no way of knowing, but Drake certainly took 6 waits on his naval raid on Cadiz, with only 2 coming back

Alan, Joanna and Pam played many pieces from an anonymous masque, 3 Italian dances and a hunting song by Henry VIII Several pieces from the Crawshaw manuscript were played as was Purcell’s ‘Britain’s Strike Home, the unofficial national anthem prior to God Save the King. We ended with Herrick’s carol, a piece from 1610-1615 which required some audience participation to get us into the Christmas spirit.