When Wakefield prospered as an important inland port

From 1702, when the Calder was first made navigable to Wakefield, until the 1950s, the influence of water traffic on Wakefield’s economy was a real one.

Until 1761, when the new cut via Fall Ing brought vessels above Wakefield weir, the head of navigation was the basin at Navigation Yard close to Chantry Bridge. Here office buildings for the great Aire and Calder Navigation were established by the mid-18th century and here, for a time, this wealthy concern had its headquarters.

In the late 18th and early 19th centuries the Calder above the weir became flanked by growing numbers of warehouses. Sloops, keels, billy boys, and west country barges crowded the wharves.

During the 18th century the maximum loading that vessels could carry through the comparatively shallow reaches to Wakefield was 25 tonnes but successive improvements, with scourings of the river and enlargement of the locks, brought cargoes of 150 tonnes by the middle years of the 19th century and eventually loads of
500 tonnes became possible.

Vessels came under sail as far as Knottingley and were then horse-drawn to Wakefield and beyond.

Wakefield’s principal trade was in coal, corn and textiles. The city became important as a raw wool market and, as the Calder and Hebble Navigation opened up the routes to the west, it became a major corn market.

There was considerable traffic also in stone and timber, dye-stuff, flax (passing up the Barnsley Canal to serve the linen industry there), limestone, iron, general goods and, of course, people. 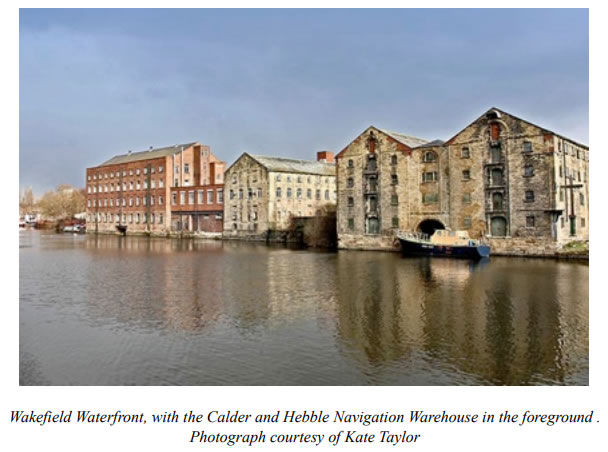 From at least 1802, boat-building was taking place in Wakefield, the principal yards lying on the cut between the Barnsley and Doncaster roads and at the top of Tootal Street, near the dam end. Among boat-building concerns was that of John Collinson, sloop and boat builder, established in Wakefield in 1822 and surviving under the ownership of his son, Thomas Collinson, until 1841.

James Craven began a boat-building business in Wakefield in 1825 and it was the James, a 190-ton schooner, built in his yard in 1839 for the coasting and foreign trade, that opened the Stanley Ferry aqueduct in that year.

Craven continued in business with yards close to Wakefield Mill and at Fall Ing cut until 1856 when he sold out to Robert Stead.

Another boat-building concern from which documents survive was that of Edward and Samuel Womack, founded at Agbrigg in 1838. It was to this firm that the Aire and Calder Navigation let the dry dock at Stanley Ferry, which was built in 1857 and which now forms part of the British Waterways complex there. Account books show that the firm built and repaired vessels for owners from a wide area.

Ancillary industries also developed. Ropes were in demand for the mining as well as the maritime industry and there was a rope-walk alongside Fall Ing Cut. George Cradock’s rope-making firm, the forerunner of British Ropes, was established in Wakefield in 1853. Sailmakers were to be found in Bridge Street and Tootal Street.

One form of investment open to Wakefield people was in ship-owning. James Craven, the boat-builder, himself had shares in a number of vessels, including the Cupid, the Capital, the Caroline, and the Elizabeth.

Documents in the John Goodchild Collection provide details of one such investment. Charles Savile (1806-1856), landlord of the Navigation Inn in Thornes Lane, his brother James, who was a local grocer, George Dryden, also a grocer, of Thornes Lane, and J W Richardson, agent to the Calder and Hebble Navigation, became in the 1850s joint owners of the Mystery, a schooner of 120 tons, built on the Trent in 1852.

A surviving account book gives an insight into the journeys such a vessel undertook in the mid 19th century and the variety of cargoes it carried. A number of voyages were from Goole to London, or to Southampton, carrying Yorkshire stone. The vessel took railway iron from Newport to Rotterdam, potatoes from the Orkneys to London, coal from Newcastle to Rouen, and barley from Ipswich to London.

Water transport offered employment as well as investment opportunities. Wakefield had its own community of boatmen with dwellings at Thornes Wharf, in Lower Kirkgate, and in the Primrose Hill area. For a time in the 1830s a floating chapel at Thornes Wharf provided a seamen’s mission.

The vessels which plied the Calder to Wakefield carried a crew of three – master, mate, and boy. Youths were apprenticed to the master for a period of three years.

An apprenticeship document of the 1850s shows that parents were expected to provide clothes and accept responsibility for medical needs but that the master would provide the boy’s keep and pay him £10, £12, and £14 for the three years of his apprenticeship.