The Elephant and the Wakefield Tradesmen’s Benevolent Institution

Tuesday 26th September 1882 was a day to remember for the residents of Wakefield. From midday shops, businesses and schools were closed, the bells of the parish church and of St John’s church rang out, the town was adorned with decorations as the people of Wakefield gathered for a grand parade. The occasion was the inauguration of the Wakefield Benevolent Tradesmen’s Institution.

The previous year the Wakefield Tradesmen’s Association had decided that it should set up an organisation with the aim of “the relief of distressed reputable merchants, manufacturers, tradesmen, professional and others… when suffering from reverses in trade, arising from circumstances beyond their control, old age, and infirmities, and their widows and children hitherto dependent upon them.” A committee was set up, led by Mr John Whiteley as president, with two vice-presidents, (John Brown and A. F. Fitzpatrick). Percy Tew, J. P. was the Treasurer, and the bankers were Leatham and Tew. Dr Wright was appointed as physician, Mr J. Whiteley as surgeon; there were four trustees and twelve other committee members. 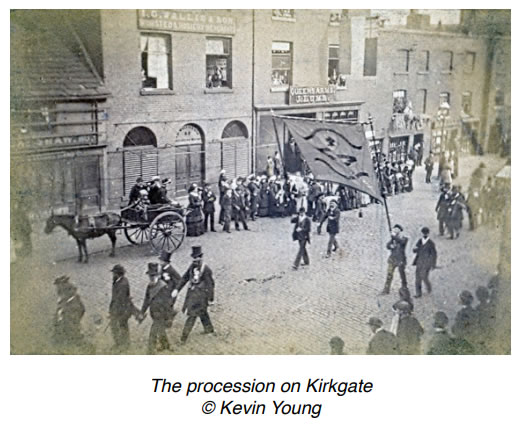 The afternoon of the 26th brought fine weather for the trades’ procession which was to start at 1.30 pm from the bottom of Westgate. Four bands had been engaged, the Wakefield Military Band, the Rothwell Temperance Band, the Ossett United Band and the Whitwood Colliery Band. The route led up Westgate, down Southgate, along George Street, Thornhill Street and Charlotte Street, back up Kirkgate and Westmoreland Street to Northgate, along North Row (now St John’s North), finishing at the Town Hall where the inaugural meeting was to take place in the Borough Court.

In the Wakefield Express of 30th September there are detailed descriptions of the decorations displayed by the shops, banks and other businesses en route. John Whiteley’s shop at the top of Westgate was decorated with festoons of ivy, plants and shrubs and a banner in white letters on a scarlet background saying “Success to the Benevolent Institution”. The Saw Inn, premises of Councillor Lupton and the headquarters of the Paxton Society, and the adjoining butcher’s shop occupied by Mr C. Lumb, were newly painted, and above the window was a Latin inscription translated as “Whomever you see to be miserable regard him as a man”. Sunflowers, lilies and scarlet gladioli adorned the building. At the Crown and Anchor on Kirkgate, belonging to Councillor Sherwood, a shelf had been erected across the front with a border of scarlet cloth and plants placed on it with a banner below saying “Success to the Cause”. A flag flew from the centre of the building with bunting running down from it, and there was also a gas illumination. Further up Kirkgate, Mr Lumb, bird and animal stuffer, exhibited examples of his art. Mr Brook, outfitter, made a show of “inflated costumes, Chinese lanterns, flags and banners.” Many other descriptions of the decorations are included, and Wakefield city centre must have had a carnival atmosphere.

Various carriages, some lent especially for the occasion, were occupied by clergy and members of the Corporation. The carriage of Mr Mackie, Borough member, included Alderman Milthorp, the Mayor, wearing his scarlet robe and great gold chain, and Mr Slater, the Mayor of Grantham who was a native of Wakefield. Facing them was Mr Henry Morgan, the Town Clerk in his robes of office. On the driver’s box was Mr Glew, the Borough member’s coachman and Police Sergeant Wright carrying the mace.

The Paxton Society was represented by three drays. The first had a trophy formed of garden tools of every variety, and a collection of seeds, mushrooms and bulbs from Mr Skinner’s at Silcoates. Latin mottoes on the drays translated as “Not for ourselves alone” and “Labour conquers everything”; they were bordered with dahlias, sunflowers, laurel and ivy. The second dray had a large gilt horn, a cornucopia, on which were seated two young girls, surrounded by more than a ton of fruit and vegetables including grapes, oranges, lemons, pears etc. Four dwarf fruit trees in bearing stood on each corner of the dray. The third dray was a moving conservatory, filled with greenhouse plants, including a large tree fern, palms, coleus and chrysanthemums. After the three drays came a waggon with “beautiful” sewing machines, followed by a tricycle belonging to Mr Charles Knowles of Westgate House, still a great novelty at this time. 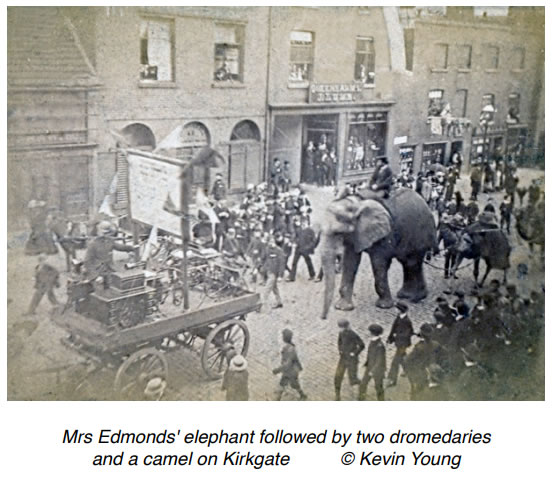 And the elephant? Mrs Edmonds’ Menagerie, previously Wombwell’s Menagerie, was in town and she permitted her band – and elephant – to join the procession. The animal was fourteen years old and 9ft 7ins in height; he was fed by the crowds that lined the streets. Her band followed in a chariot drawn by two
dromedaries, and a double hump camel.

Bradley and Craven’s dray carried the patterns of an “immense entablature beam and connecting rod” for a pair of pumping engines for the Scarborough Corporation Water Works, designed by Mr Filliter, engineer for Wakefield’s new Water Works.

Mr A. Homburg who was one of the most active members of the Benevolent Tradesmen’s Institution, had a business as a hairdresser and perfumer on Cross Square and his dray had the “most novel and miscellaneous collection of beards, wigs etc. which has probably ever been seen in this country or on the continent”. Two men, fourteen girls and thirty eight boys were sitting on benches on the dray wearing wigs representing characters of all ages and nations.

Both the Great Northern and the Lancashire and Yorkshire Railways were represented; the last had a dray carrying men and boys repairing waggon-sheets and sacks, which they usually worked on at the Hoist on Thornes Lane. They were followed by a pleasure boat belonging to Mrs J Webb which was on a dray accompanied by three small boys dressed as sailors.

Wakefield’s butchers were well represented with eight waggons. The first one, led by a butcher’s boy in checked smock and white apron, carried two beasts accompanied by four slaughterers “with their implements of execution polished as bright as it seemed possible to make them”. The other waggons carried cows, sheep and pigs. Behind the waggons came nearly a hundred master butchers and their assistants, closely followed by a giant pork pie weighing nearly 28 pounds supplied by Mr Gosney, confectioner of Northgate. 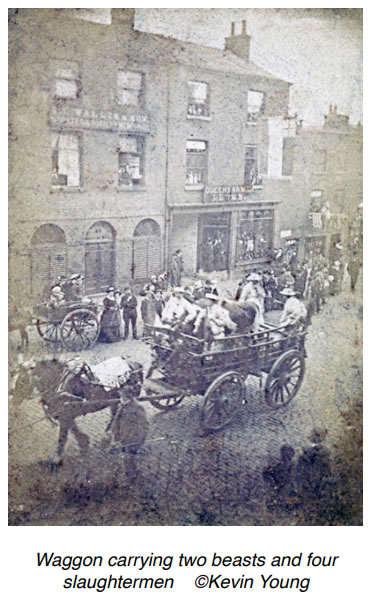 The Paragon Works had three drays carrying their machinery with men at work on the machines for cutting and punching tin, copper and iron. The drays belonging to two printing firms carried ‘Minerva’ printing machines, and had compositors at work. One distributed 15,000 copies of the song specially written for the occasion by a Mr Thompson.

The Corporation Fire Brigade in full uniform rode on their engine, and four water barrels and a street sweeping machine belonging to the Corporation accompanied them.

The Wakefield Express describes numerous other displays by ironmongers, colliery owners, maltsters, flour millers and traders, masons, brick-makers, timber merchants, furniture-makers, coopers, rope-makers, soap-makers, grocers, and bakers. Saddlers, cobblers, brewers, dairymen, tallow chandlers, carpenters, joiners, wood turners and curriers all contributed their own displays. The long list provides a vivid impression of the wide variety of businesses that were established in Wakefield at this time in the manufacturing, retail and service industries.

At half past three, the inaugural meeting of the Tradesmen’s Benevolent Institution started in the Town Hall, chaired by the Mayor, Alderman Milthorp. He praised the inhabitants of the town, and the members of the committee who had established the Institution and arranged the day’s events, and wished them success in the future.

Mr John Taylor, the honorary secretary read his report, repeating the aims of the Institution, and noted that £205 from life members, annual members and donations, had already been paid into the bank, and there was a considerable amount further that had been promised. They should shortly be in the position therefore to offer two pensions to deserving people.

Mr J. Walker of Leeds, and Alderman Watson of Bradford, referred to the Tradesmen’s Benevolent Institutions in their respective towns, and how successful they had been. They were followed by Wakefield’s M.P. Mr R.B. Mackie, who spoke of his own involvement with the Leeds organisation, and praised the aims of the new Wakefield one, wishing it success. Mr Percy Tew commented that the Institution would depend not only on a good subscription list but also on legacies. He was followed by Mr Henry Beaumont who proposed that the rules drawn up should be accepted, and was supported by Mr W.H. Lee and Mr E. Green.

Mr John Brown moved a vote of thanks to the trade, friendly and other societies who had given their efforts to make the day a success, this was seconded by Mr J.F. Whiteley who commented that “theirs was the warm, health-restoring virtues of the geyser, bubbling from the warm recesses of the heart”. The Mayor was thanked for the use of the Town Hall by Reverend A. Chalmers, who also expressed his hope that the “working classes…would establish a movement” of the same sort so that “the workhouse could be turned into a winter garden…” The Mayor responded to the vote of thanks, and the meeting closed.

Refreshments followed for the invited guests prepared by Mrs Lupton senior of the School of Cookery on Almshouse Lane; wine, beer and mineral waters were supplied free of charge by local businesses. Delegates from other towns, and some local gentlemen were provided with a dinner by Mr Stocks at the Strafford Arms. 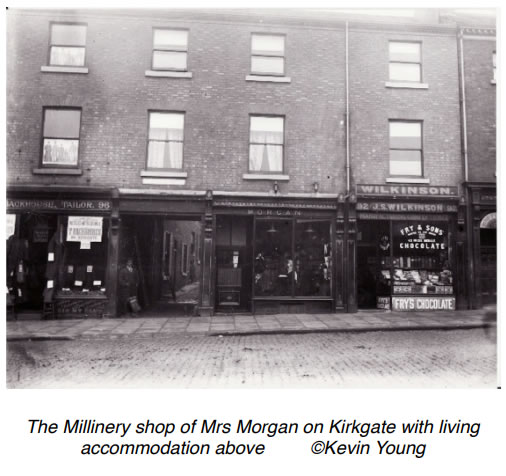 Soon after the procession had dispersed in the afternoon, crowds of people made their way to Mr Mackie’s field, just below the railway bridge on Balne Lane where a gala took place. The bands that had been in the procession played and were joined by the Sandal Hand Bell Ringers. Dancing commenced, which was followed by fireworks earlier than intended, as unfortunately the weather turned, and there was a thunderstorm and heavy rain.

The accompanying photographs were taken, it is believed, by Henry Morgan junior, whose father Henry Morgan senior, was Town Clerk. Henry junior, worked in his father’s office. In 1881, aged 24, he was living with his parents at 75 Kirkgate where his mother had a millinery shop. It is likely that the photographs were taken from the window above the shop. The glass photographic plates were found in the 1970s in the attic of a house on Stanley Road, Wakefield, where Henry Morgan junior was living in the 1911 census. Consisting of over 120 photographs, they have been deposited on loan at West Yorkshire Archives.