The Building that Might have been the Town Hall

The building in Wood Street, Wakefield, which has been the City Museum from 1955 to 2012, has, in its varied past, seen two deaths and hosted at least one event of national significance.

Wood Street was opened up in 1809 as a new road to provide a direct route to the new-town development of St John’s Square.

In 1820 subscriptions were raised to build Public Rooms at the town-centre end of the street, with a grand Music Saloon on the upper floor. Shares were offered at £25. Prominent among its promoters was the Vicar of Wakefield, Samuel Sharp. It seems that money was slow to come in. The building work took many months and the saloon itself did not open until 22 December 1823. 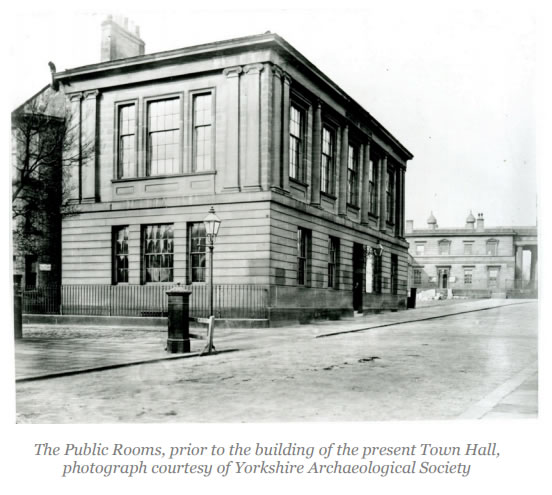 Meanwhile, in the darkness of the unlit street on 16 November 1821, 29-year old William Webber, a clown in Cooke’s Olympic Circus (which was paying its first visit to the town and was sited in Wood Street) stumbled over some stones, fell into the unprotected ‘area’ (the deep light-well) at the side of the unfinished building and
broke his neck. The Coroner decided that the Proprietors would be fined £20 if their building site was not made safe within 18 hours.

In addition to its concert hall, the Public Rooms housed a subscription library, a newsroom, and a savings bank. In the 1820s and early 1830s, Wakefield’s public Dispensary occupied a part of the basement. Access for patients was gained by the outside stone steps on the south side of the building. The cellar provided residential accommodation for the apothecary and for two house servants in what was described in 1832, when the apothecary died prematurely there, as ‘a poor miserable underground apartment contiguous to a damp beer and porter cellar’. Following such adverse publicity, the Dispensary swiftly moved out (into Barstow Square).

Following a public meeting in March 1832 and the inevitable request for subscriptions, public baths were established in the basement of the Public Buildings the following September, taking the place of the Wakefield Dispensary and, no doubt, designed to replace the lost income from the Dispensary’s rent. Amongst the
promoters was again vicar Samuel Sharp. Whilst the baths very possibly had a recreational element – families could attend together for 10s 6d – they were provided primarily for hygienic or medicinal purposes. They included a vapour, or steam, bath, a warm bath, a plunge bath and a shower.

There were numerous concerts and talks in the Music Saloon. Wakefield’s premier social event, the annual charity ball, which was founded in 1828, was held there. In the 1820s and 1830s, visiting showmen brought panoramas – huge lengths of painted canvas which were drawn from one roller to another, displaying their scenes of battles or distant lands to a marvelling public.

After the opening of Wakefield’s magnificent Corn Exchange in Westgate in 1838, the Music Saloon lost popularity. Events like balls and bazaars, and even professional operas, took place instead in the much grander Corn Exchange upper-floor assembly room.

Wakefield’s Mechanics’ Institution, formed in 1841, met during its first year in the Assembly Rooms in Crown Court, holding its evening classes in a number of other rooms in the town. From June 1842, however, it leased the Music Saloon and its Ante-Room with powers to sub-let.

The (national) High Court of the Ancient Order of Foresters met for a week in the Music Saloon in 1850 with some 100 representatives attending from all over the country.

In 1855 the building was put up for sale. Wakefield had as yet no Town Hall and the Council considered buying it. The Church Institution was also interested in the opportunity. However, it was sold to the, already resident, Mechanics’ Institution. The Music Saloon itself remained available for hire for public events.

In 1897 two men, who ran local post-offices, Joseph Ranns and John Cussons, convened a meeting of their fellows there to discuss the lack of adequate payment.

Their work had grown with the introduction of the Post Office Savings Bank in 1861, the taking over of the telegraph system in 1870 and the introduction of postal orders in 1872. The parcel post, which required the provision of weighing scales, began in 1883. Sub-postmasters provided their premises, were given no paid holidays and no cover for illness. They also had to pay for the erection of their telegraph poles. The National Federation of Sub-Postmasters was founded at the meeting.

The building was renamed the Institute of Literature and Science in 1910.

By the 1930s the Mechanics’ Instititute/Institute of Literature and Science, was failing. It was dissolved on 1 October 1935. In 1935 the committee of the Institute offered the building to the local authority and it was formally conveyed to Wakefield Corporation in December 1936. The Council had little idea at the time what to do
with it! The volumes which had belonged to the Subscription Library were still there and the City Librarian was asked to rescue whatever he felt appropriate. The rest was to be ‘disposed of’.

The Workers’ Educational Association was granted the free use of a room in July 1936.

One of the first events held in the Music Saloon by permission of the Council was a whist drive for victims of disaster which had occurred at Wharncliffe Colliery on 56 August 1936.

In January 1937 the various organisations renting rooms in the Town Hall were provided with accommodation in the Institute Buildings (as the Rooms were now styled) instead. Wakefield Historical Society was granted the use of a cupboard there in March 1937.

By 1937, Wakefield’s Naturalists’ Society and the local branch of the Women’s League of Health and Beauty were using the Saloon on a regular basis.

In August 1937, the Town Clerk was requested to advertise the availability of rooms in the Institute Buildings. From October, William Higson of Pontefract, organised dances and dancing lessons there.

It was not until 1955 that Wakefield Corporation decided to move its Museum into a part of the Public Buildings, still leaving the Music Saloon for lettings. Later the Music Saloon, too, was taken over for museum displays.