There have been floods at Westgate Common for centuries. The Environment Agency, which in 2012 completed major works to alleviate the problem, attributes them to the coming together, near Magdalene Bridge, of two becks, the Ings-Alverthorpe beck, or Westgate beck, coming down from Kirkhamgate to the north-west and the Balne beck coming from Wrenthorpe to the north. From the point where they merge, at Brooksbank, the waterway is called the Chald beck or River Chald or sometimes Ings beck. The bridge, or culvert, taking the flow beneath Westgate and into Chald Lane, is, in times of heavy rain, unable to cope with the volume of water. Magdalene (or Maudeline) Bridge was so named because of the chantry chapel that stood there in medieval times. 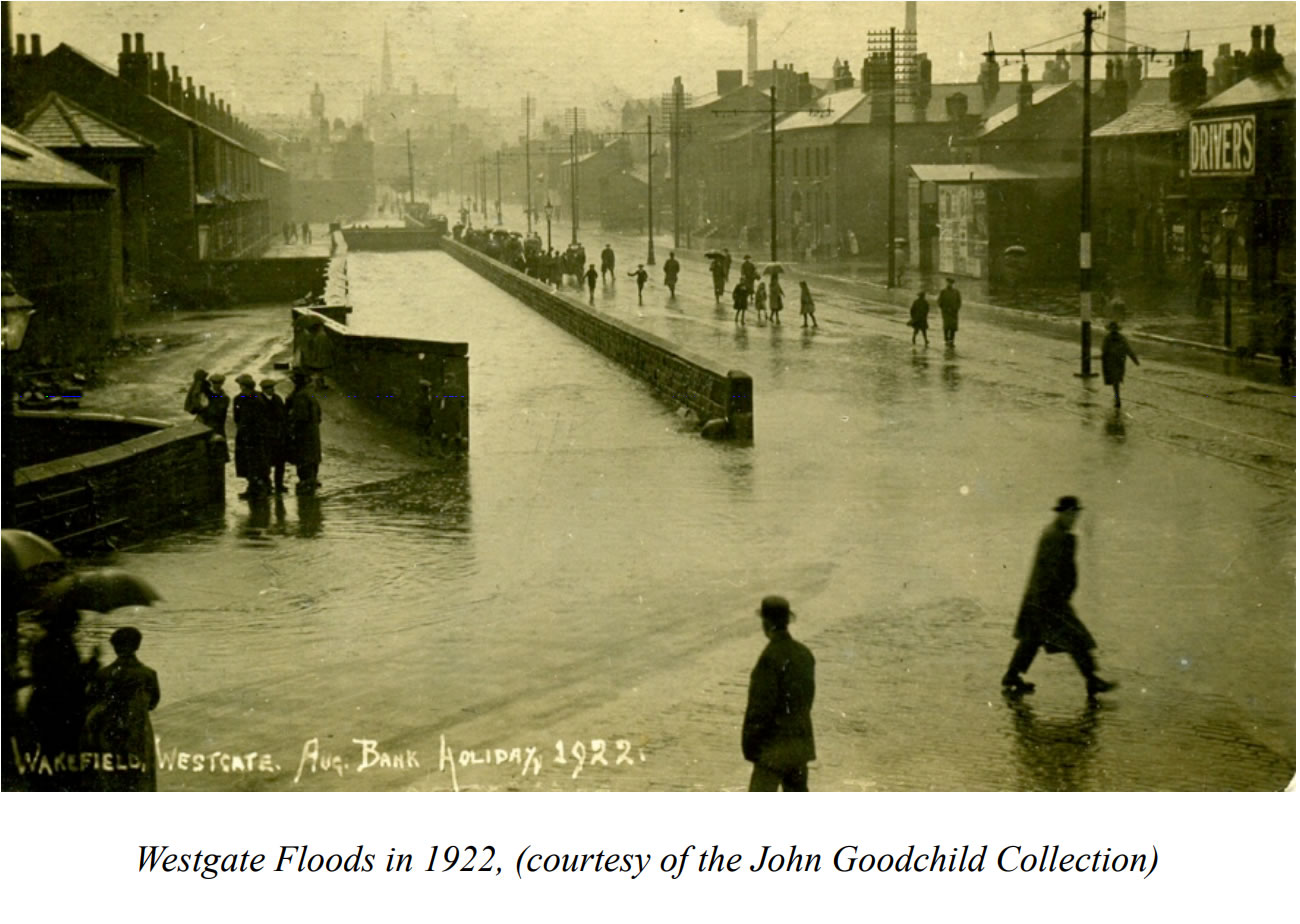 John Goodchild notes, in What’s Where at Westgate Chapel that the present chapel, which was opened in 1752, replaced the original 1697 chapel for Protestant Dissenters because of its situation close to the junction of Alverthorpe Road and Westgate, which was ‘very low and so subject to inundations that it was becoming unwholesome and dangerous to assemble there’.

John Hewitt, the first published author to write about the history of Wakefield, refers to the floods on Christmas Day 1821, after previous heavy rains. He notes that: ‘At Westgate Common the water flowed further and higher than the town’s pump opposite Messrs Naylor’s cloth dressing shop. Much inconvenience was  ccasioned, persons having to travel the length of the Long Causeway in carts or on horseback rather than walk in the water up to their knees. The Long Causeway extended from Westgate Bridge to the end of Alverthorpe Road and was protected on each side by posts and rails. Being close adjoining Westgate Beck it was often flooded when the water was high. In 1843 a stone wall was built alongside the beck and both lengths of posts and rails were removed much to the convenience of the public as now this would prevent the overflowing of the water on that side of the beck.’ 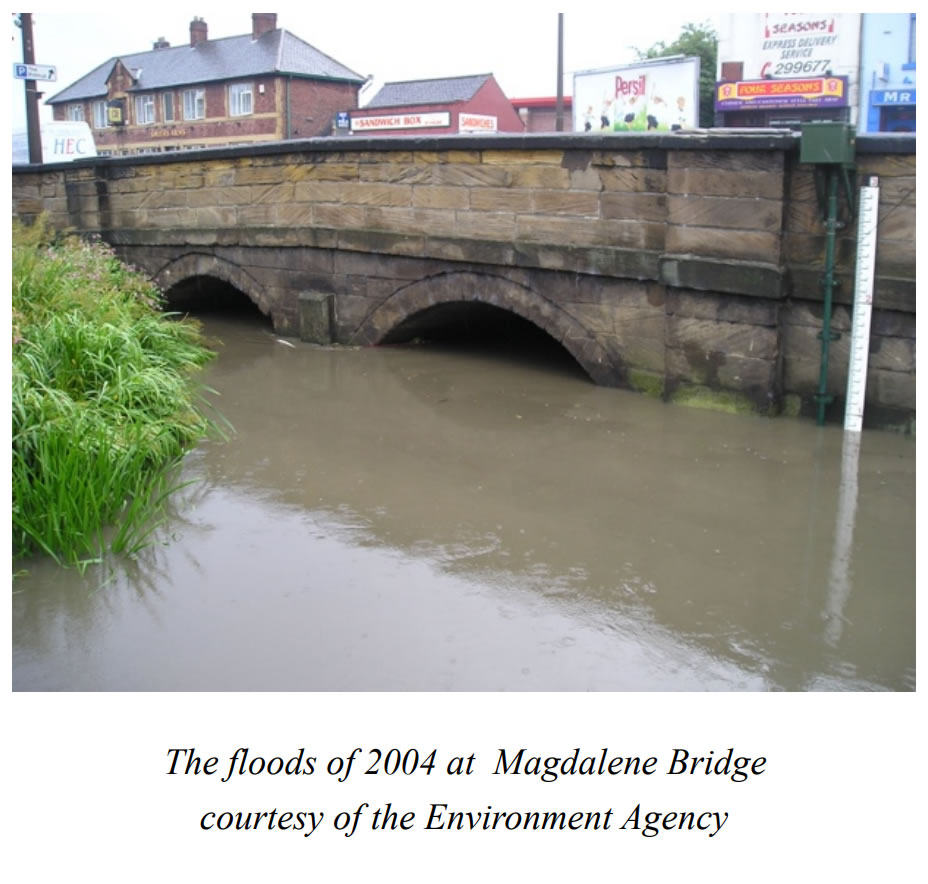 The Wakefield Journal and Examiner of 23 November 1866 has an account of terrible floods across Wakefield the previous weekend. It includes an account of flooding at Westgate Common where a small community of Irish people had settled. ‘The Chald was swollen to a dreadful extent by the rains and poured down in a wide and great stream through the lower end of the town, devastation and ruin attending its steps. Brooksbank was of course soon inundated but most of the inhabitants had time to make their escape. Some five children, however, were left behind and their piercing screams were heard by the crowd which had gathered
around the edge of the waters. At the lamp at the bottom of Westgate, Mr McDonnold, the Chief Constable, at length made his appearance and called for volunteers to go to the children’s rescue. Mr John Edward Kemp, Mr Evan Hunter, and a noted character named Charles Harkin at once came forward and, taking hold of a rope, the party carefully waded their way round the prison, up to their armpits in water. They had to break down some palasading (sic) to reach the hovel where the children were. The velocity of the current and the difficulty in reaching the place led to a discussion whether the children should be left behind as the lives of the adults were of much more importance, but the enthusiasm of the youthful minds, added to the piteous cries of the children to be removed, carried the day and Harkin, carrying two of the poor things in his arms, and the others carrying one apiece on their backs, the party set off on their return, which they safely effected. As they came into view, they were loudly cheered by the assembled crowd, blessings were poured in amazing volubility from the lips of the collected Irishwomen upon their heads. Captain Armytage, the governor of the prison, with praiseworthy generosity threw open the Industrial Home to those who had been turned out of their houses and supplied them with hot coffee and eatables. Our reporter visited the place about eight o’clock and found a number of Irishwomen and children crowded round a blazing fire, some female attendants from the prison in the meanwhile liberally dispensing among them the welcome coffee and bread and butter. Again at
Brooksbank, a woman had a husband sick in bed and when the waters had risen some feet she began to fear the place would be submerged. She therefore took her husband on her back and attempted gallantly to wade through the swift current. In all probability she would have been drowned had not some men from the adjoining mill thrown her a rope which she seized and by its aid managed to reach a place of safety.’ 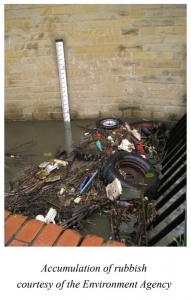 The Wakefield Express of 4 February 1984 has an account by Ron Swinden giving his idea of why there had been flooding at Westgate Common twice in the previous year. He thought that it was because there was no longer any work done on clearing the beck of silt and weed. He said that before the local government changes in 1974, Wakefield Corporation had sent workmen every summer to remove silt, water weed, and other rubbish when the stream was running low. Huge sandbanks were removed from Brooksbank and then taken away by horse and cart, or later by lorries. Most of the flooding was caused by the silting up of the arches under Magdalene Bridge, but another cause was building houses where there were previously green fields and ditches. He also referred to people throwing all sorts of things into the beck such as prams, buckets, bicycles, bedsteads, and old mattresses. The same problem occurs today.

In 2009 the Environment Agency, which had begun a broader Wakefield flood alleviation scheme in 2001, announced a new phase of the project to deal specifically with Ings Beck and its tributaries. This involved building storage areas at Kirkhamgate (Fenton Dam), Wrenthorpe Park, and Wakefield Prison to hold back water from the becks at times of flood. It also included improving some embankments (for example at Wrenthorpe Park) and adding further height to some flood walls.

A number of properties on the south side of Westgate, near the Smith Arms, were demolished to allow for new culverting and the wall of the beck, in front of the terraced houses which form Morton Parade, was improved.

Further work was carried out downstream where the Chald Beck passes through the Ings Road retail parks and at its confluence with the River Calder.