350 Years Ago: The Act of Uniformity and some of its local repercussions

On the Sunday before St Bartholomew’s Day in August 1662, 350 years ago, some 2,000 of the clergy of the Church of England in England and Wales, having voluntarily chosen to leave their churches, parsonages, schools and other offices, now conducted their last Church of England services and entered upon a life which held little promise of even a livelihood for themselves and their families: no wonder that the day on which the enabling Act of Parliament, passed in the previous May, was implemented – and just in time to prevent any who left receiving their tithes due at Michaelmas (29th September) ensuing – they knew as Black Bartholomew’s. The great majority of these clergymen, who regarded themselves as being ejected as they could not in conscience stomach the newly framed conditions of continuing their offices, were of the Puritan Presbyterian persuasion in regard to church discipline and organisation, essentially they were described as church
puritans; some 172 only were Congregationals, favouring quite independent churches. The ejected clergy included many from local churches, including Wakefield parish church (only since 1888 a cathedral), and initial hopes of reconciliation caused these nonconformists (the ugly word nonconformism has but recently been invented) to hold their religious meetings at times other than those of the services of the local Church of England congregation, although they began to ordain their own successor ministers by 1666. From West Ardsley (or Woodkirk) Church was ejected Christopher Marshall, a Congregational who had been partly educated in the North American colonies, and who followed in a line of parsons there with puritanical views from as early as 1619, when the then minister was seventy. Some of this dissenting congregation’s members were from Alverthorpe and in that village a nonconformists’ chapel was opened in 1674; this and the congregation itself,
formed with supporters of the ejected Joshua Kirkby in 1662 from Wakefield parish church, joined to build a chapel, lying physically between their communities, at Westgate End, opened in 1697. They, and it, became the direct predecessors of the present Westgate Chapel (Unitarian) in Wakefield.

The event of 1662, leading as it did to the formation of congregations in Wakefield, Leeds, Bradford, York, New Mill and elsewhere, has a real resonance in the situation of our own day. 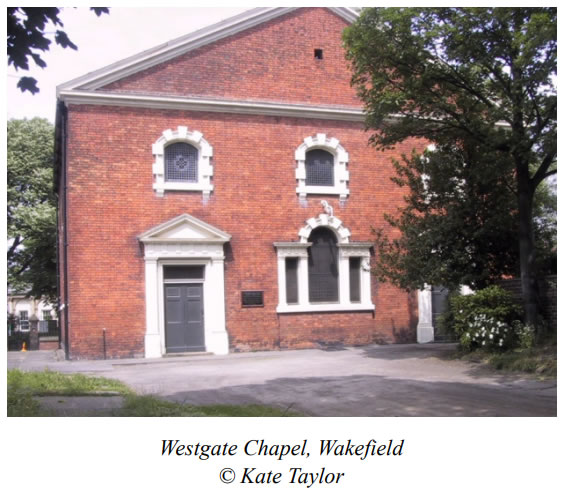 The reasons for the ejection were straightforward, although there were the usual ugly associations of politics, too. The Act of Uniformity, to use an abbreviated title, was passed by a now strongly cavalier-dominated Parliament in 1662: clergy were to abjure their oath taken earlier under the Solemn League and Covenant – an action which they regarded as perjury; the control of parish discipline was to pass now to the bishop; the system of episcopacy was fully restored; there was to be re-ordination of those not made by a bishop, and each had to assent to the whole of the Book of Common Prayer. One ejected minister described ‘The conscience that would not suffer us to comply with the things now imposed’. Increasing cruelty by the authorities followed, with further vindictive legislation and recurring imprisonments and fines which only ceased in 1687, although  with the intervention of the king’s indulgence from 1672 into 1675.

Curiously, but very humanly, among the Presbyterians who did conform were John Tillotson, a Yorkshireman later to become a noted Archbishop of Canterbury, and another who was rewarded for his compliance with the authorities by appointment as Bishop of Norwich; several others were offered bishoprics and deaneries but declined.

The ejected ministers were supported by their lay people, frequently persons of rank and standing in society, as well as ordinary folk: these provided accommodation, a livelihood and the finance for conversions and purpose-built meeting houses (or chapels as they were then and are frequently still known). The printed diaries of the ejected Oliver Heywood, BA, the Puritan Apostle of the North, give first-hand detail of the situations. Mill Hill Chapel in Leeds was the first purpose-built chapel in Yorkshire and perhaps in the North: it was a large, handsome and expensive building on the present site in what is now City Square, Leeds, and was opened in 1674; it and the still surviving St Saviourgate Chapel in York of 1693 are both far more ambitious than the (admittedly rural) Commonwealth puritan chapels at Great Houghton and Bramhope.

The religious enthusiasms of the seventeenth century, despite the many attempts made by the authorities of both church and state to secure a high degree of uniformity in matters of church administration and practice – there was little difference over theology in 1662 – witnessed the rise of the still present denominations of the Society of Friends, Presbyterians (the English ones, not the Scots), Congregationals, Baptists, and Unitarians, and a few others now forgotten except by those interested in such matters.

There had been cases in Wakefield and the West Riding of ecclesiastical and theological nonconformity from at least the early sixteenth century, but 1662 witnessed the laying of the solid foundations of modern Nonconformity and the beginning of the ultimately successful fight for the liberty of the individual’s spiritual conscience.