The research group was launched at the Historical Society lecture meeting in April 2018 to encourage interested members of the Society to learn more about the collections in the Wakefield History Centre, and to become more accustomed to accessing and using archive resources in general. As a result a small group of about ten members led by Lesley Taylor met in one of the Centre’s glass soundproof rooms every week in July. Documents selected for these first sessions were mainly from the eighteenth century: from the Registry of Deeds, the Quarter Sessions, the Wakefield Poor Rates, and several maps and plans. At that time there were proposals for a Council initiative to improve Westgate so during the summer we took an evening walk down the street and it was agreed that group members would choose aspects of its history to research. In September 2018 Phil Judkins led a couple of very useful meetings in the Town Hall. These suggested many more resources on Westgate and provided an analysis of the phases of the street’s history.

After further group meetings looking at a variety of records in the autumn of 2018 members of the group have pursued individual research, meeting in the Archives occasionally to report on progress. For much of this year we have also been using the resources of the Wakefield Local Studies Library and, on most Monday mornings, those of us working there can discuss findings over a coffee.

A visit to the Brotherton Library in Leeds was made in July 2019 where we explored documents from the Yorkshire Archaeological and History Society Collections which include records from the Manor of Wakefield, including the Manor Court Rolls. The papers of JW Walker, author of ‘Wakefield: Its History and People’ provided other interesting materials.

At two meetings this October group members presented a taster of their current research, which is summarized below.

Shirley Levon is researching 105 Westgate, discovering who has owned and occupied it, and how it has been used since its construction in the Regency period. This has led to some research into the grocery and the furniture trades as these were its main uses during the course of the 19th century.

Ken Rowley is researching the Black Horse Inn in the 19th Century and how this relates to the life and times in Westgate and the town of Wakefield.

Lorraine Simpson is researching the history of Quebec Street and the people who lived there. She has consulted written histories, census records, building registers and Street Commissioner’s records in an effort to build a picture of the life of the street.

Lesley Taylor is learning about the history of the Greencoat School in Westgate, and piecing together the story of one colourful master in the mid-eighteenth century. She is also considering the development of the public streets which were opened up when private plots on Westgate were developed as thoroughfares.

Denise Thorp is looking at the history of Westgate End, but has concentrated on the mills in Westgate and especially at the moment on Marriott’s Mill and the Marriott family. If time allows she will then look at the Naylor’s business, Stonehouses and George Lees who also had mills and warehouses in Westgate.

Julie Trueman’s home for several years in her youth was the Cornhill Hotel, 120 Westgate, demolished in 1975. A substantial brick Georgian house with 14 rooms, it was built by the congregation of Westgate Chapel for the Rev Thomas Johnstone at the beginning of the ninteeth century. Her aim is to discover the history of the house and its occupants.

Gill Hutchison have been looking at two plots on the enclosure map for Westgate with a particular focus on the inhabitants and the development of the two streets which are now Carter Street and Cheapside.

Wakefield Council have submitted a successful bid to improve Westgate and the yards that lead from it. They have identified particular buildings and yards, and the Archive group intend to provide support by doing further research on these buildings.

We would welcome any information about these buildings and yards. Please contact us at: info@wakefieldhistoricalsociety.org.uk

The group continues to meet informally at the Local Studies Library on Monday mornings to share our individual progress.  Three members of the group are preparing short talks for the Society’s AGM on 11 March, on the Marriotts and their mill on Westgate Common, stories from Quebec Street, and the history of the Cornhill Hotel outside Westgate Chapel.

The group met at the Gissing Centre, to share and update our research. Members of the group provided short presentations about Cheapside, archaeological assessments at 120 Westgate, and information about two men who had occupied 105 Westgate. By sharing our information we are discovering many links and learning from each other.

The Study Group that is conducting research on Westgate met on Monday 28 October at the Gissing Centre, when we enjoyed two short presentations highlighting research by two of the members on the Burton Family and Carter Street, and on the architecture of Westgate’s late-eighteenth century buildings. We discussed what further research we would be interested in pursuing. We shall be meeting again on 4 November at the Local Studies Library to look at secondary sources. 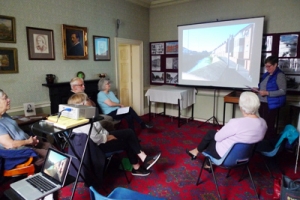 Members of the Archive Group met at the Gissing Centre to provide short presentations of their research that they have been conducting on Westgate. There were many questions after each presentation, and we were sometimes able to cross-reference with our own research. It was clear that many interesting aspects of Westgate had been discovered, and would expand our knowledge of buildings, streets, and events in the area. and we look forward to hearing about the research of other members in a fortnight’s time.